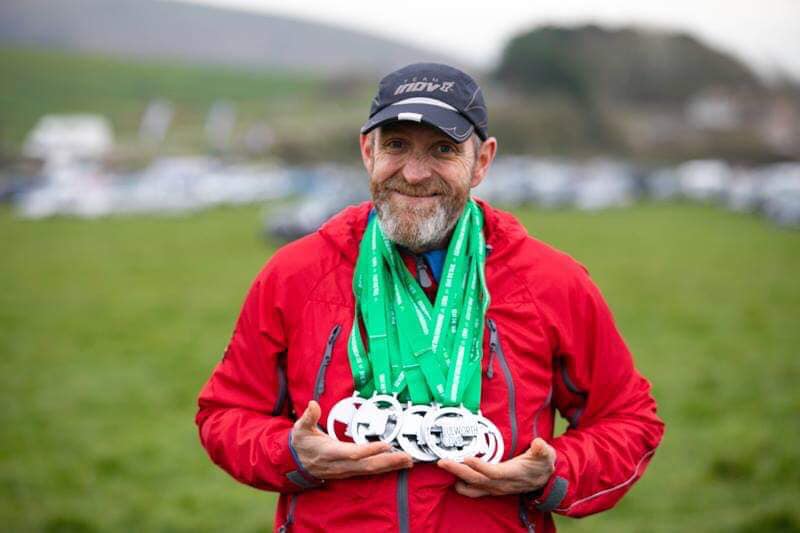 A VILLAJOYOSA man is running the equivalent distance of climbing Everest and the world’s top peaks to raise money for Benidorm’s Doble Amor school.

The ultra-marathon runner, originally from Cwmbran in Wales, has already done three parts of the challenge on a circuit rising 1.8 kilometres up to Torre del Aguilo

The Aitana run meant Dave doing 12 laps of the course in over three-and-a-half hours to clock up 23.5 kilometres.

The challenge is all about raising money for Doble Amor which is a special Benidorm college that looks after people with disabilities.

Ex-Royal Marine Dave told the Olive Press: “The school provides a structure for education and social interaction that gives the guys that go to it an incredible amount of purpose, joy, and happiness.”

“My partner Eva’s brother has attended Doble Amor for over 20 years, and the people there have inspired me in so many ways that I wanted to do my bit to give something back to them.”

His fourth run in the challenge will be on January 16 where he will tackle 70 kilometres on Torre del Aguilo, which will equate to 4,884 metres of Papua and New Guinea’s top peak of the Carstensz Pyramid.

His remaining six runs will all be over 70 kilometres and will take between 16 and 24 hours to do.

Dave’s grand finale comes in May with the crowning glory of Mount Everest, as he hopes to raise at least €2,500 for Doble Amor.

“There are only a handful of runners that have done the world’s seven highest points but to do a ten peak challenge will be tough and unique,” he added.

Donations for the ‘Ten Peak Challenge’ can be made via https://gogetfunding.com/reto-de-las-10-cimas/