Home Costa Blanca BIG HASH STASH of under 4,000 kilos on a speedy ‘narcoboat’ is... 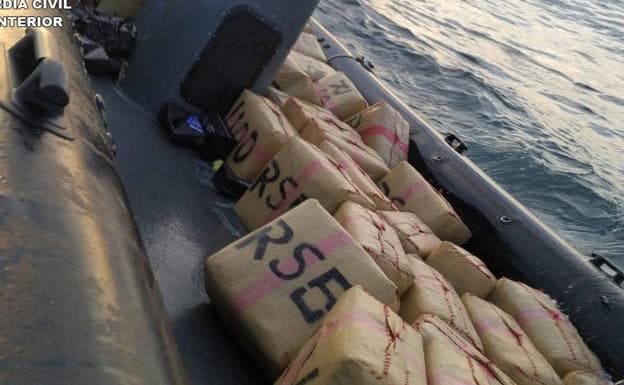 PLANS to land almost 4,000 kilos of hashish by boat on the Costa Blanca came unstuck this morning(May 19) when the craft was intercepted by the Guardia Civil.

Ten people aged between 22 and 53 years have been arrested and charged with drug trafficking.

No details were released about their nationalities or where the shipment came from.

The Guardia operation started at 3.00 am when they spotted a suspicious vessel travelling off the coast of Villajoyosa.

The ‘narcoboat’ was racing across the water at 52 knots, equivalent to 96 kilometres an hour.

It had three engines, with a 450 horsepower capability on each of them.

Officers from around the area were scrambled along with the Villajoyosa Policia Local and a Valencia region helicopter to intercept the craft.

The crew started throwing the bales of hashish into the sea when they saw the Guardia approaching the boat close to their landing point of El Arsenal beach.

All of the bales, which numbered just short of 100, were recovered.

The boat was impounded along with four vehicles that were waiting for the drugs stash at El Arsenal.