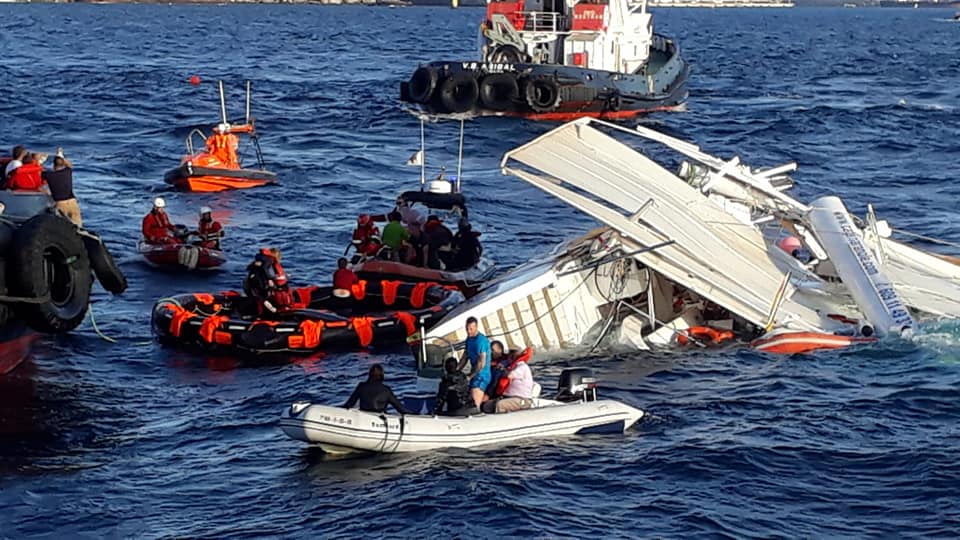 A popular tourist boat, the Ole catamaran, sunk off Cartagena on Sunday afternoon with 33 passengers, including six children, on board.

A Red Cross rescue boat and a helicopter ferried the passengers to safety with several small fishing boats helping in the operation.

Everybody was accounted for, with 14 people staying overnight in Cartagena’s Santa Lucia Hospital after being treated for hypothermia.

They were all discharged this Monday morning.

Sea and weather conditions were good on Sunday and the ten-year-old catamaran did not apparently hit anything.

One theory that investigators are working on is that was an issue with the structural integrity of the vessel.

The boat started to sink after 4.00 pm after splitting into two, around a mile out from Cartagena’s port.

One passenger, Maria Angeles Balaguer, told the regional La Verdad newspaper: “We were sitting down and we suddenly heard a loud noise that sounded like plastic breaking.”

“We then noticed the boat was broken on its right side and we started to sink.”

“It took a few minutes for us to be rescued but it seemed like a lifetime,” added Maria.

The 23-metre long catamaran, which sank to the bottom of the sea bed, was a popular attraction with daily trips around the bay that could accommodate up to 96 passengers.

It’s website refers to an ‘experienced crew’ that have been ‘sailing the Mediterranean for eight years’.

Andalucia wants to vaccinate children under 11 against Covid in December