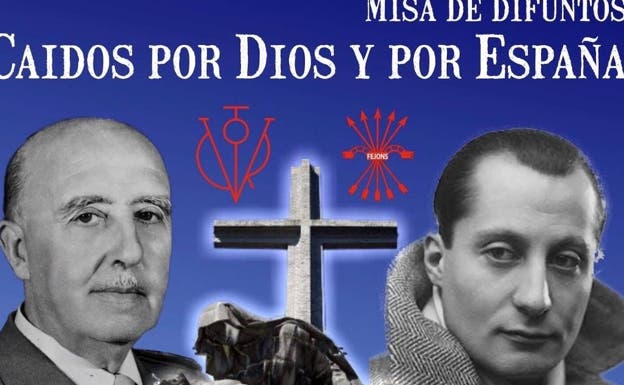 AN Alicante church service remembering ‘those who fell for God and for Spain’ has been cancelled after a promotional poster featured photos of dictators General Franco and Primo de Rivera.

The image was distributed via social media ahead of a scheduled mass this Thursday at San Nicolas Cathedral in Alicante.

A fifteen-strong group had asked for a mass be dedicated to ‘the fallen’, but the use of Franco and de Rivera images kicked up a storm.

The outcry caused the group to withdraw their request for the service.

San Nicolas priest, Ramon Egio, said: “I cannot prevent anyone from praying for all of the fallen and the mass was not meant to be a tribute to anybody specific.”

“We don’t ask for political membership cards from people who come to us to ask for a mass for the deceased.”

Egio added that he did welcome the news of the cancellation stating that the ‘vision of the Church is to unite and not to divide’.

The Valencian government will be writing to councils and church leaders to remind them about possible sanctions if the Democratic Memory law is not complied with.

The law bans any public representation and celebration of General Franco and offers help to relatives of people murdered during his regime by assisting them to track down and exhume their bodies.

Legal action was going to be started over the Alicante service but has been suspended following the request withdrawal.

Valencia’s Participation and Democracy Minister, Rosa Perez Garijo said: “It is a violation of the Memory law and an insult to victims”.

FRANCO CONCENTRATION CAMP SITE TO BE TURNED INTO HISTORICAL CENTRE