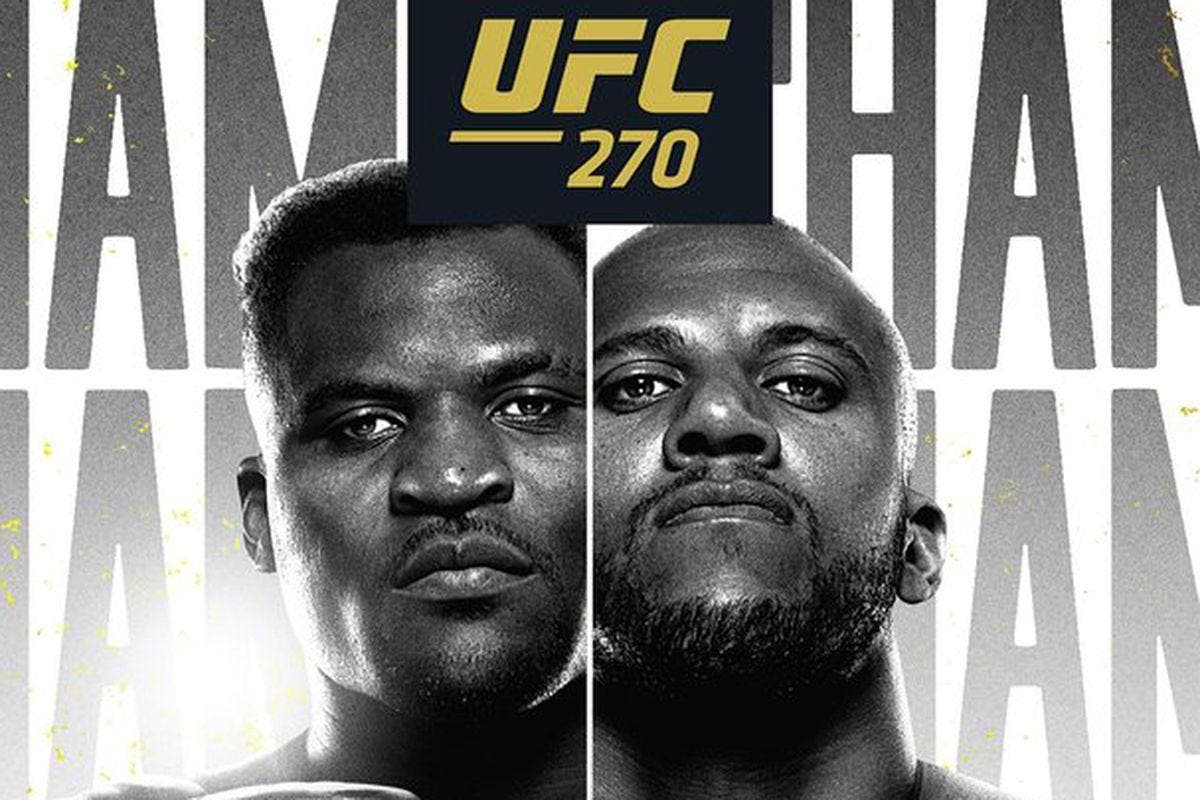 Live from the Honda Center in Anaheim, California, the world’s most famous mixed martial arts promotion will return to our screens this 2022 for a highly stacked pay-per-view event of significant importance. Not only will the UFC flyweight division deliver a much-anticipated trilogy for the coveted title between Brandon Moreno and Deiveson Figueiredo. But the world’s heavyweight championship will be unified when current champ Francis Ngannou clashes with the Interim champion and his former sparring partner Ciryl Gane.

Francis Ngannou (16-3-0, 14 KOs) delivered a history-making moment last time out, with a championship-winning knockout over Stipe Miocic at UFC 260.

The 35-year-old Cameroonian native is shaping up to become one of the most intimidating fighters in combat sports history. Ngannou has been scrutinized for his lack of technicality, but this hasn’t prevented a mythical God-like amount of punching power that’s decapitated ten fellow heavyweight competitors during his UFC tenure – nine of which ended inside the first five minutes.

It was difficult to notice Ngannou’s evolution, his win streak leading up to the championship bout at UFC 260 was, again, four consecutive round 1 knockouts. But there was undoubtedly a notable change, especially when two diverse wrestlers in Curtis Blaydes and Cain Velasquez could not capitalize on Ngannou’s grappling deficiencies.

UFC 260 and it was the Ngannou’s opportunity to gain retribution over Miocic, and he did so whilst proving to the world his all-around skillset had received an upgrade. The rise in African viewership and following has grown, as Francis Ngannou has been nothing but a money-making machine for avid fans and sports bettors. Bookmakers have particularly been hesitant of the round-1 knockout prop, and when combined with a DraftKings promo code to place you bet, the champ has been a cash-cow for handicappers as well as the UFC.

Speaking of dollars, drama ensued with the UFC following Ngannou’s title win between scheduling and money (allegedly), and an Interim UFC Heavyweight bout was created whilst the champion had barely celebrated his success.

While an Interim title fight was heavily frowned upon by critics and fans alike, the undefeated Ciryl Gane dismantled Derrick Lewis and lifted the paper title.

Ciryl Gane (10-0-0) may have taken a shortcut, but there’s no denying the calibre of a matchup this road has led us to. The 31-year-old French native in Gane could become the PR & marketing dream for the UFC’s first pay-per-view event of 2022.

Gane versus Ngannou is a dream matchup that UFC fanatics had already fantasized about before their championship-winning successes. Former training partners are two of the most physically intimidating heavyweights since Brock Lesnar – the scheduled matchup ahead could easily break heavyweight PPV records.

Brandon Moreno (19-5-2) and Deiveson Figueiredo (20-2-1) will share the octagon for a third consecutive time. The main event of UFC 256 was arguably the best fight of 2020 but ended in a majority draw.

Six months later, the two ran it back at UFC 263, where the judges’ opinion was removed entirely. Moreno dished his Brazilian foe an upset stoppage via rear-naked choke in the third round, becoming the first-ever Mexico-born UFC champion.

The trilogy bout was initially scheduled for UFC 269, but a rescheduling situation has positioned them as the UFC 270 co-headliner.

The newly crowned champ went on record to show his displeasure of fighting on one occasion in 2021: “I have just one fight this year, and I wanted to fight in December because I have two years in a row fighting in December and winning and enjoying Christmas with my family and everything. But right now, I’m fighting in January, my first time-fighting in January, so I need to make a diet, increase mass and all that stuff so that I know it will be hard, but I don’t care. I just want to keep my belt with me and more because this is in Anaheim; Anaheim is so close to my hometown, Tijuana.”

The complete UFC 270 hasn’t been finalized, but the latest rumour mill has pitted another showcase matchup between Dustin Poirier and Nate Diaz. Social media speculation continues, and both parties have expressed their interest; whether the bout will come to fruition is yet to be known.