MOTRIL is the place you didn’t realise you needed to visit until you’ve left. It won’t win the award for most beautiful town or best beach (though it’s nestled between many), but it will open up a whole history about Spain that you never knew.

For instance, why is the town set 3km away from the seafront? Why can some of the best rum in the world be found there? And why does it produce fruit and vegetables that some places in Spain can’t even grow? The answer to most of this is sugarcane, and the story starts way back in the 13th century, as I learnt on my trip to Motril’s Preindustrial Sugar Cane Museum, with Omio Travel.

The first reference to sugarcane dates back to the 10th century but it wasn’t until the late 1300s that Motril became known as the real ‘sugar capital’. 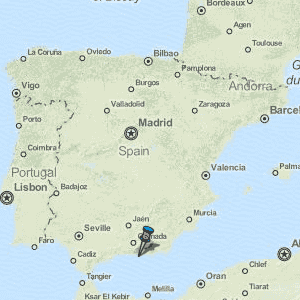 Following the taking of Tarifa in 1295 and Gibraltar in 1310 by the Christians, and the treaty between the Genoese Republic and the Nazari Kingdom of Granada, it became easier to sail the Mediterranean, which led to the development of a trade route between Genoa and Flanders.

This meant that sugar could be loaded at the ports of Almuñecar and Malaga, and sold on the main markets in the Western world – sugar was fast becoming liquid gold.

By the 16th century, production was booming, with 11 sugarcane factories operating in the town and up to 300 workers in each.

During this time, sugarcane was growing like wildfire, with much of it occupying the land between the seafront and the town.

It grew well on the coastal plains thanks to the salty earth coupled with Motril’s micro-climate, which is still used for crops today and why this coast of Spain is dubbed the Costa Tropical.

Sugarcane factories soon started popping up all over the town, fuelled by wood that powered a huge mill connected to two rollers, which then crushed the sugarcane.

Two operators, known as the ‘feeder’ and ‘returner’, would stand either side of the rollers passing the sugarcane between them – it was a job for the most brave, with many losing fingers and hands due to the violent nature of the rollers.

Each year, the sugar mills produced some 45,000 cone-shaped blocks of sugar.

With so many factories operating in the town, the council was forced to step in to play a mediating role, keeping harmony between landowners, labourers, merchants and sugar house managers.

Limits on how much wood and where the wood could be cut down were put in place, and a standardisation was created for the cone-shaped mould in which sugar was left to crystallize and then sold – this also affected the amount of tax paid on each.

Sugar was worth a lot of money, and the factory owners were becoming greedy, so much in fact that they used up almost every last piece of wood in the area and it wasn’t long before deforestation became a serious problem.

Each season, a sugar mill consumed around 3,000 cartloads of wood, destroying 20 million square meters of forest land. This led to the sugarcane crisis.

By 1673 only three sugarcane houses remained in Motril, due to the shortage of wood and by the end of the 17th century, sugar production was no more.

That is until the middle of the 19th century when steam-driven machines were introduced and Motril reclaimed it’s position as the sugar capital.

The new sugar mills were differentiated from the old by the term, ‘ingenio’.

One of the most notable ones in the area was called The Ingenio de la Palma, named after former manager Lucas de Palma (1582-1583).

Over the 200 years that followed, The Ingenio de la Palma, turned its production into an artform, hiring only the most skilled workers and master sugarmakers – they had no temperature control, it was the sugarmaker’s job to remove the sugar from the heat at just the precise moment, before leaving it to cool and crystallize.

The last sugar mill closed 16 years ago in Motril but you can still see some of the large chimneys towering over the town.

One legacy it did leave behind though is rum, made from molasses (the thick syrup created when sugar is melted down), and while there are no sugar mills left, the famous Ron Montero Distillery is open to the public for tours and tastings.

The Ron Montero Distillery is one of the oldest buildings in Motril. It was founded in 1963 by Francisco Montero (or Uncle Paco), but is now run by Maria Elena Targa and her husband (nephew of the great founder), and their daughter.

Before Maria came along, the distillery wasn’t open to the public, but her family decided the incredible history of the rum was too good not to share with the world, so they opened it to the public in the late 2000s – in fact, it’s the only open rum distillery in Europe.

Originally from Nicaragua, Maria is a natural storyteller and during the tour, she shared the secrets of the rum with me; how it’s made; what gives the rum its colour and flavour, and what makes Ron Montero so unique.

Using a mixture of oak barrels – some over 60 years old, they age the rum and then blend it, taking a little from multiple casks.

Depending on how old the barrel is, will depend how golden the rum turns in colour – the newer it is, the deeper the colour.

Each tour ends with a tasting – I personally loved the Reserva, though the Café Montero did slip down far too easily!

Visiting Ron Montero was unlike any distillery visit I’ve ever done.

Maria Elena makes it feel personal somehow; her passion and love for rum, sugarcane and Spain was infectious and I left feeling as if I’d taken a small part of her passion with me.

From sugarcane to sugar loaves

Sugarcane takes roughly five years to grow to full height, which can reach 10m tall. It’s harvested at the beginning of every year and cut close to the bottom, where the most concentrated part of the sugar is.

From the 15th-18th century, everything was done by hand.

Workers would strip the leaves off the harvested sugarcane and then pass it between giant rollers, powered by a mill.

In the 15th century, this mill was powered by animals, in the 16th century fire, and finally from the 18th century onwards, steam.

Once every last drop of sugarcane was squeezed out, the juices were then boiled to purify them, resulting in a thick, concentrated deep golden liquid, known as molasses.

While the sugar boiled, workers would stand over the top, skimming off the scum that formed on top – this was then fed to the animals working in the factories.

To bring the impurities to the surface, a mixture of animal blood, egg shells and ash was added to the sugar as it boiled.

Once the workers were happy all impurities had been extracted, it was transferred into a massecuite pan, where it was boiled again until sugar crystals began to form.

The task of the master sugar maker was to stop the boiling process at just the right moment.

The crystals still had to be soft enough that they could be moulded into a sugarloaf without crumbling.

The moulds were terracotta pots, called forms – similar to a plant pot – with a hole in the bottom.

A brown piece of paper was placed at the bottom of the pot before the sugar was placed inside.

The sugarloaf would then be left for three to four days before the paper was removed.

Once removed, the form was then placed over a pot for up and left for up to six month. During which, any liquid (molasses) would drip through the hole – this was then reboiled again and the process repeated.

To give the sugar its white colour (the more white it was the more it could be sold for) a mixture of chalk and water would be poured on top – sometimes three times. This also helped to push through any leftover molasses.

It never quite reached the whole way through, so the cone would always have some brown coloured sugar at the bottom.

Once ready, the sugar loaves were then sold all over the world.

There aren’t too many hotels to choose from in Motril but one of the most popular is Hotel Elba, right on the seafront.

Bedrooms are spacious, breezy, and each has a balcony. There’s an outdoor pool, small gym, and cocktail bar too.

The best thing about this hotel though is that it’s bang opposite one of the best (if not the best) restaurants in Motril, La Ballena.

They also bring out little extras like grilled red prawns, which are a real treat. Make sure you book, it gets very busy.

If you want something a little more private, take a look at Casa De Los Bates.

Set in the hills between the sea and the town, this 5-bedroom mansion is a lovely spot to spend a night or two.

Family owned, by Ignacio and his brothers, the character of the 19th century house remains throughout, from the details on the open fireplaces to the winding staircase and decorations. The Italian-style palace is surrounded by beautiful, large gardens, with an abundance of flowers and tropical trees such as avocado, mango, persimmon, guava, and banana.

It’s more of a B&B than a hotel, though if you request ahead of time, the chef will prepare you a special dinner, which you can enjoy outside on the terrace.

Tempted? Visit Omio Travel and plan your next adventure.

Jon Clarke (Publisher & Editor) - 17 Jan, 2022 @ 17:00
Jon Clarke heads on a riding adventure into the Andalucian outback of the Sierra Morena near Sevilla

TRAVEL SPAIN: Six amazing places to visit in 2022 that probably aren’t on your bucket list but should be