The Green party of Andalucía announced it is to ask judges to stop construction work on the seven-million-euro project. A spokesman for the group said illegal housing and plastic greenhouses will be the main beneficiaries of the water.

A leading economics expert at Granada University also claims the Junta de Andalucía’s estimates 15,000 people will benefit from the water are way optimistic.

“The water from the second reservoir will supply only 4,000 locals,” Professor José Manuel Castillo said.

The proposed second reservoir for the Contraviesa mountain range will help create more plastic greenhouses and supply water to illegally built housing estates, according to a leading economics expert.

Professor José Manuel Castillo of Granada University also denies regional government claims the balsa (reservoir), which is to be built next to an existing water container between Almegíjar and Torvizcón, will guarantee water to 15,000 people.

He claims only 4,000 people will benefit from the 350,000 cubic square metres of water the second reservoir will supply when it is built.

“The construction of the balsa will not guarantee water for the local residents but supply a service to the huge scale building projects in nearby Rubite.
“It will also fuel the spread of invernaderos (plastic greenhouses) and supply other illegal housing estates.

“The Junta de Andalucía states up to 15,000 people will benefit from the balsa’s construction but only 4,000 people at the most will.”

Professor Castillo was speaking after the Green party of Andalucía announced it was to ask one of the region’s top civil courts to outlaw the construction of the second balsa, which is expected to begin in February once land belonging to local farmers has been expropriated. Officials from the party believe there are “hidden interests” behind its construction.

Granada branch spokesman Juan Ruiz told a press conference on December 5 the party is compiling a file to present to the Court of Contentious Administration, claiming the water will be used for illegal construction and plastic greenhouses.

The head of the regional government’s environment department in Granada, Gerardo Sánchez defended the Junta’s plan to build the seven-million-euro second balsa and denied both the Green party and Professor Castillo’s claims.

“The water will only be used by the population of the Contraviesa. It will not be used in agriculture nor will it be used for construction.

“The Green party are shunning reality with their allegations.”

The planned second reservoir has caused controversy since the project was announced last year. The Junta de Andalucía informed local farmers it must “grab” 130,000 square metres (m2) of their land, including 28,000m2 of a European Union funded organic vineyard. 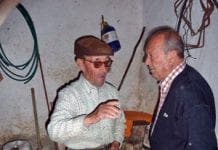 Miguel, costa wine and The Contraviesa