A VICIOUS row has broken out over the “illegal” construction of a mountain chapel in La Alpujarra.

A family in Carataunas claims the local council has demolished and rebuilt the Padre Eterno (Eternal Father) hermitage on their land without their permission.

Ana María Loureiro and her husband José María Orensanz also say that Salvador Rodriguez, the mayor of the mountain village, has “stolen” the land upon which the small church sits.

They claim that the wife of the council leader has registered the majority of the hectare plot in her name.

The family has now denounced Rodriguez, his wife Pilar Guerrero and the municipal architect for falsification, coercion and usurpation.

The row started when the Padre Eterno mountain chapel was part destroyed when a car rammed into it earlier this summer. 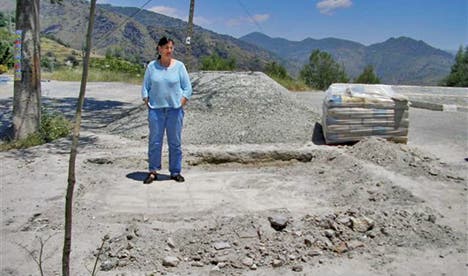 Ana Maria Loureiro standing in the ruins of the chapel

A councillor from Carataunas then demolished the wrecked hermitage, claims the family, without the correct documentation or their permission.

“In June José Daniel Vigil, without permission from the ayuntamiento, the public works department from the Junta de Andalucía or us, knocked down the small chapel,” Ana María told the Olive Press.

“Three times we politely asked him to stop, but he refused, threatened us and called the Guardia Civil, who treated us like criminals,” she said.

Ana María then claims the plot of land was registered in the name of the mayor’s wife before the correct documentation was obtained to rebuild the chapel, believed to be the only one in Andalucía dedicated solely to God. 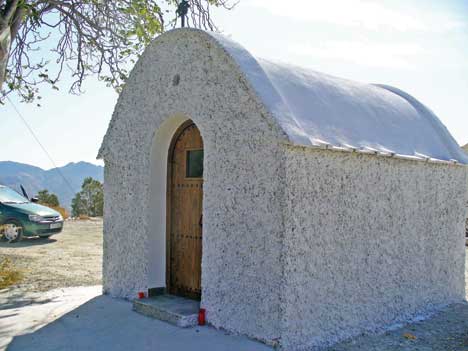 “They have acted as if the land were there own. The land registry says 0.8 hectares of our land belongs to Pilar Guerrero, but we have IBI tax payments that say all of the land is ours. They have stolen from us with apparent immunity,” she said.

The council denies any wrongdoing. “We do not want to intervene in all of this. We only authorized the work. Padre Eterno, which has stood on the same site for 70 years, is a part of us. It belongs to the cultural heritage of the locality,” Salvador Rodriguez said.

The Orensanz-Loureiro family has long been involved in a bitter dispute with the council of Caratyaunas.

As reported in issue 22, Anna Maria went on a 15-day hunger strike in a bid to obtain the correct documentation to build a restaurant on her land.

Salvador Rodriguez, who was been in charge of the mountain village for 13 years, is also no stranger to controversy.

He has been investigated for the construction of a 100-home apartment block in the village, which with 220 permanent inhabitants is one of the smallest in Granada.

Partido Popular mayor Rodriguez won re-election to the village council last year by the toss of a coin. This is after both he and his socialist PSOE opponent, José Daniel Vigil, obtained the similar amount of votes.

Meanwhile, a resident in the village has reported a developer because of an “illegal” wall.

Francisco Manuel Porras initially complained to the council in 2005 that the six-metre-high construction had been erected without the correct documentation.

As stated in the report made to the Guardia Civil in Órgiva, the council did not act on the claimed illegality.

The wall, which was built by the company Jamablás, part collapsed in September.