IT is supposed to cut down on substance abuse in Galicia. But a draft law proposed by the region’s health authority could effectively outlaw wine production.

And this will mean an end to some of Spain’s best white wines, such as those produced using the Albariño grape.

The legislation, which is currently under discussion at the Xunta de Galicia, hopes to reduce drug dependence by placing tough restrictions on the availability of both legal and illegal addictive substances within the northern region.

And included in the list are wine and beer.

Now, the region’s association of wine producers fears they could be put out of business if the measures go ahead.

“If wine is finally included in this legislative text, we will be condemned to disappear because there will be strict measures that will stop the consumption of our products,” said José Manuel Rodríguez, the chief of Galicia’s Ribeira Sacra denominacion de origin (appellation). 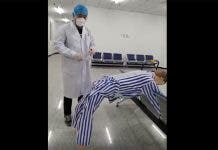 Alex Trelinski - 1 Mar, 2021 @ 20:30
POLICE have broken up an Alicante home-squatting gang that illegally rented out properties to vulnerable people who were forced into high monthly...