It is classed as one of the best wines in Spain and is served in some of the nation’s top restaurants. MARK ROULSTON heads to the modest village of Jete to revisit the even more modest bodega of Calvente

WITHIN ten minutes of my first visit to Horacio Calvente’s bodega, I was perched seven metres off the ground atop a stainless steel vat. With a torch in my hand, I was peering inside the container at 10,000 litres of Cabernet Sauvignon, Merlot, Tempranillo and Syrah grape pulp on the second day of its two-week fermentation.

That was September 2006. Today, that formless must is available to buy in a bottle after its year and a bit-long slumber in barrels of American and French oak. And at less than 10 euros a pop, Calvente’s Castillejos is one of – or perhaps the – best Granada reds on the market. And that is no piece of shameless sycophantism, aimed at bigging up an advertiser.

Horacios’ three wines (two reds and a white) have been making big waves in the world of wine since the turn of the century, when they first became commercially available: the white made the most recent edition of wine bible 1001 Wines You Must Try Before You Die (Universe, 2008) and it is also on the menu at posh eatery El Bulli in Catalunya. The two reds, which in addition to the Castillejos includes the more expensive Guindalera, are championed by Jesús Barquin, one of Spain’s most important wine critics. Rumour has it that crates of the stuff are shipped on a regular basis to the Netherlands and Poland to be enjoyed by high society.

A bit of history

We can trace the history of Calvente’s wine back to 1992, when he produced 700 bottles of the stuff to be enjoyed by himself, his family and friends. Today, with funding of 700,000 euros (“From various backers,” he tells me), the former farmer’s annual reap is 70,000 bottles. It is shipped out to delicatessens and restaurants throughout Spain and around 30 per cent of it is exported to the continent.

But wine production in Granada goes back a good few years further. Bronze Age vessels containing traces of fermented grape must and also the fossilised seeds of the Vitis vinifera (common grape vine) have been found during archaeological digs at Loja, Baza and at various points along the Costa Tropical and the Contraviesa mountains.

It really kicked off throughout Spain, however, during the time of the Roman occupation. The Romans brought with them their viticultural knowledge, and soon Andalucía was covered with vines. 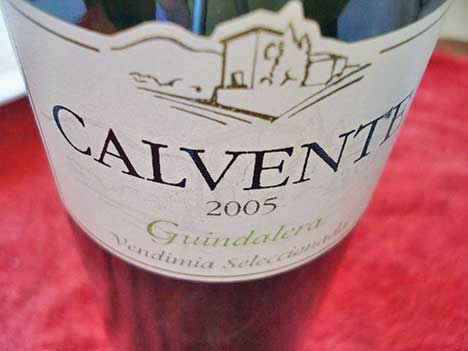 It was carried over to Moorish rule when, even though the drinking of wine was prohibited, its production proliferated in the Granada province at Loja and Alhama in the west and Alcala La Real (before it fell under the jurisdiction of Jaen) and Baza in the north. In the south, the wine flowed in the Contraviesa and La Alpujarra. The names of some villages and towns in these mountainous regions show their wine producing past. Albuñol and Albuñuelas are derived from the Arabic for vine, while Pampaneira takes its name from the pampano, a variety of grape which is sadly no more.

Now, we fast forward about 500 years or so to 18th-century Valencia and the birth of botanist Simón de Rojas Clemente, the man considered Spain’s greatest expert on grape vines. It was his knowledge, cultivated in the chateaux of France, that led to a rebirth in wine making in some parts of Spain – Andalucía included – following centuries of decline.

It was he who noticed that the Moscatel was the most dominant variety of grape along Spain’s southern coast, Jete included.

And it is this sweet grape that has gained Calvente the majority of its plaudits. His award-winning whites use only the Moscatel de Alejandria, which are picked from vines that are between 60 and 70 years old. These are planted at 1,000 metres or so above sea level. The grapes benefit from vast contrasts in temperature, they bake during the day, and freeze at night, meaning they preserve their natural acidity.

His 2006 white has been singled out by this year’s edition of Neil Beckett’s annual tome, 1001 Wines You Must Try Before You Die. In it, Calvente shares the pages with wines from Romanée-Conti, Petrus, Yquem and Dom Perignon.

The book describes thus the 2006 (which this correspondent had the pleasure of tasting on the very day it had finished fermenting during my initial visit): “2002 and 2006 have been the best vintages. The wine has a powerful and focused fruit expression… where a most harmonious balance is crowned on the finish by the characteristic bitterness of dry-fermented Moscatel.”

Two words there describe the white perfectly: powerful (even though it is only 12.5 per cent, you do notice it when you polish a bottle off) and fruit. The vines are surrounded by the fruity abundance of the Costa Tropical and the wine takes on the taste of the grapefruits, chirimoyas and nisperos that are grown in the area.

We repeat the tour we first did two years previous. The vendimia of 2008 is fermenting (I politely reject the offer to climb the vats again) while last year’s harvest of grapes for the reds is maturing in oak barrels before it is bottled.

“Mediterranean wines have a different personality than those from the interior,” he says as we approach the bodega de crianza (maturing room). “The structure is different, similar to the light Albariño whites from Galicia.”

I know where he is coming from. Wines from the other Mediterranean regions, from Málaga, La-Alpujarra-Contraviesa around to Murcia, Valencia and Catalunya, all share a pleasant sprightliness on the palate. Compare this to wines from Rioja, say, which tend to be heavy, disappointing affairs these days unless you put your hand deep into your pocket… in my opinion, anyway.

It would be a mistake to call Calvente a cottage industry. A garage industry would be more accurate. After the grapes are picked from the nearby eight hectares of vine in the Sierra de Cázula y Almijara, they are taken to the bottom floor of Horacio’s Jete house, which doubles as the bodega.

It is here the fruits ferment and it is here that Horacio and vintner, Antonio López de la Casa, can be found when the annual harvest each September is over.

“We are here even on Sundays. Wine never knows when it is a public holiday,” Horacio says, his hands forever stained purple from the grape juice.

Even though Calvente is a big wine, its production is small compared to other bodegas. The total annual output of 70,000 bottles between the three vinos is much less than most other bodegas in Spain – especially the mass produced wines that fill the supermarket shelves around Europe.

“My wines are not generally available in supermarkets. I distribute to specialist food shops and good restaurants and hotels. Yes, demand is greater than the number of bottles produced but I am not looking to make a wine of quantity, rather a wine of quality.

“The best publicity I do is by word of mouth. When people talk of Calvente, they are talking about a good wine. This is something that makes me proud,” he says.