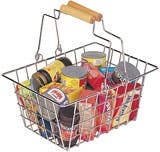 You can get Don Simon orange juice and Mahou beer at own brand prices if you know where to shop. The Olive Press sent Paul Whitelock to investigate why shoppers are switching supermarkets and choosing different brands in an effort to make their money go that little bit further

MANY shoppers in Spain, be they Spanish amas de casa or British housewives have begun to switch supermarkets and brands in an effort to save money in these hard economic times. Everyone is looking for a bargain.

Unsurprisingly perhaps, trade is brisk in the cheaper supermarkets, such as LIDL, Día, Plus and Ahorra Más.

On top of this, sales of supermarket ‘own brands’ (or marcas blancas) have increased hugely, which is hardly surprising when you can save up to 40 per cent compared to the well known brands.

It was the British grocer John James Sainsbury who invented the concept of the own brand.

It happened in 1882 when he launched Sainsbury’s own-brand smoked bacon. Now everybody does it on a wide range of products, not just food.

According to research the marcas blancas already account for 30 per cent of products on sale in the shops, and one in three euros of our food shopping bills is spent on these more economic makes.

But who manufactures these cheaper goods? Traditionally a secret, El Corte Inglés, Eroski and Mercadona now identify the manufacturers of their own-brand goods, and since last June we have been able to find out who makes what in all stores by looking at the website www.aesan.msc.es.

One company however, stresses that it does not make products for anybody else. Danone recently launched a publicity campaign to point this out.

So, how are these own label brands cheaper?

Well, for a start they are not normally exactly the same as the branded products of the manufacturer. Also, because the supermarket chains can order in vast bulk they can negotiate with the suppliers and bring the cost down.

Moreover, little or no money is spent on advertising and often the manufacturer will locate close to the buyer to reduce transport costs.

Some examples for you to look out for include the following: Casa Tarradellas which makes paté for Carrefour and pizza for Mercadona, both much cheaper than their own versions.

Día sells own brand beer, brewed by either Mahou or San Miguel, for 26 céntimos, compared to 45 or 47 centimos for the branded alternatives.

Buy Ybarra mayonnaise with Alcampo and you pay a mere 1,15 euros and finally Don Simón orange juice is only 57 céntimos when it’s in an Ahorra Más container.

So, check out the alternatives and see how much you can save on your weekly supermarket shopping trip.

Every little helps, as one supermarket chain in Britain has been claiming for years. Happy shopping!