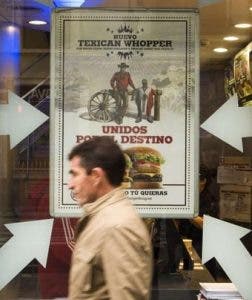 A BURGER King advert, which features a squat Mexican draped in his country’s flag and an American cowboy, has offended Mexican officials in Spain.

The Mexican ambassador claims the posters for the new “Texican whopper,” a cheeseburger with chile and spicy mayonnaise, inappropriately displays the Mexican flag, which is draped over the diminutive wrestler like a poncho.

“This advertisement denigrates the image of our country and uses improperly Mexico’s national flag,” Jorge Zermeno wrote in a letter to Burger King in Spain.

The ambassador contacted the local offices of Burger King after he saw the posters. The burger is only available in Spain.

Mexico has strict laws prohibiting the defamation of the flag, Zermeno said. He asked Burger King to cancel the ad campaign that “offends Mexicans and Mexico.”