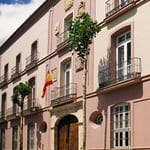 SIR Richard Branson is in a bidding war over the running of an exclusive 20million euro spa retreat in Malaga province.

The media mogul’s Virgin Group is competing against Far East group Six Senses to take over the running of the Villa Padierna hotel in Carratraca.

Branson himself has visited the spa hotel – where Lord Byron and Alexandre Dumas once stayed – on two occasions over the last two months, the Olive Press can reveal.

The Virgin boss and two female members of staff spent a couple of days at the historic hotel in April, after an initial visit in March.

“He liked it very much and said it was very beautiful,” said a source at the hotel. “We left him on his own at the hotel with two ladies from his business team.”

So impressed was Branson with the hotel that the following week he sent a four-strong delegation to run an in depth study of the hotel’s accounts.

Reservations manager Annemarie Kuipers confirmed: “His team were here again for a few days last week and I understand have made an offer to run the hotel.

“But everything has to be perfect, so we will have to wait and see.”

She also confirmed that Anglo-Indian group Six Senses were visiting the hotel this week with a view to making a rival bid.

“It is too early to say, but we hope to have it tied up and hotel open again in June.”

The spa in Carratraca is steeped in history. Once a retreat for Roman centurions, who came here to relax after battle, it was later visited by writers Lord Byron and Alexandre Dumas.

Since a multi-million pound refit by businessman Ricardo Arranz, it has 43 bedrooms with a black marble bathrooms, colonnaded indoor pools and countless works of art.

Branson previously owned the La Residencia hotel in Mallorca, which he launched in the 1980s. He sold it to the Orient Express group in 2002.

The Virgin Group owns or runs over 100 hotels around the world. It would be the group’s first in Europe for a number of years.