THERE was never any question which of the two Marbellas Michelle Obama was going to visit.

The underrated, undervisited old town, or the emblem of overstuffed opulence that is the nearby port of Puerto Banus.

Thankfully, as the US president´s wife wandered around the atmospheric casco historico, she had a chance to appreciate the very best of the Costa del Sol.

For the shady cobbled streets, with their charming old buildings bedecked in bougainvillea and hibiscus, are the epitome of Andalucian charm.

Beautifully preserved, the narrow lanes are full of character and brimming with some of the region’s most stylish boutiques, hotels and restaurants.

There is a distinct emphasis on quality and the hard-working local restaurateurs clearly go out of their way to make their terraces attractive.

This couldn’t, of course, be further from the tarnished image of the town, which was rocked by possibly the world’s biggest property scandal in 2006.

Turning Marbella into a global watchword for corruption and greed, disgracefully Operation Malaya saw the rounding up of more than 100 politicians, businessmen and lawyers in the town.

Estimated to have involved around two billion euros of illicit money – mostly for illegal property licences – the end result was a town short of politicians (no bad thing, of course) and with around 40 per cent of its houses said to be illegal.

To say that Marbella was suffering from something of an image problem would be an understatement.

But, thankfully, the town is getting back on message. Property is slowly starting to sell again; new businesses are opening by the week and tourists are starting to trickle back to an old faithful after a few years dipping their toes in alternative waters.

“I think Marbella feels a bit like Centre Parcs to a lot of British holidaymakers,” reckons businesswoman Debbie Pea, who has lived in Marbella for three decades.

“After spending a couple of summers in Florida or Turkey – perhaps to get away from the tarnished image of Marbella – they are now coming back.

“They have a love/hate relationship with the place, but once they finally come back they feel safe and at home.”

Like numerous other business people in the town, the boss of Originals interior design company feels like she has been through hell over the last four years.

“It was like having the rug pulled out from under our feet,” she explains. “What with the recession and the kicking Marbella has been through, it has been incredibly tough.

“We have all had to reinvent ourselves and there has been zero glamour and lots of hard work.”

The end result is a more streamlined, better quality range of services in the town.

And by the town, she means very much Marbella, not its curious sister Puerto Banus.

“People who live here never really go to Puerto Banus. It is all about money and really just for the tourists,” says Pea.

Glossy glass shop fronts are a shrine to flamboyance and flashiness

That, however, should not put tourists off visiting the port, which the locals sometimes call ‘Port of Abuse’ thanks to its reputation as a place to get up to no good.

Built in the 1970s by legendary property mogul Jose Banús, it certainly does its best to lure people from the straight and narrow, with row after row of restaurants, bars and clubs, many of the stripping kind, lurking in the back streets.

Here superstars step out of supercars and onto superyachts, and the white-washed buildings and glossy glass shop fronts are a shrine to flamboyance and flashiness.

You will find the yachts of the Saudi royal family and Theo Paphitis, who often spends holidays in Marbella, as well as Ferraris and more Bentley’s than in Park Lane. 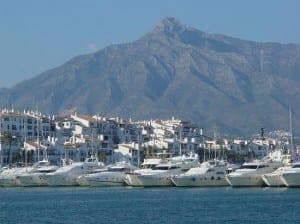 In winter there will be Russian ladies in fur coats and plenty of people drinking cava (note not champagne).

There is plenty of rubber-necking and everyone pretending that they have got the money to own a yacht, when in truth, most can’t afford to shop in the port.

This is of course, not surprising, when you see the long line up of fashion emporiums, including Dolce and Gabbana, Gucci and Versace.

As one British newspaper recently described a visit: “It’s mildly interesting gawping at the surgically enhanced Paris Hilton-lookalikes flirting with paunchy lotharios and male models, but it’s so council house-meets-wannabe-WAG.”

Luckily however, you can quickly escape up the coast on foot towards trendy beach clubs like Buddha Beach, where there is a better quality of guest.

Here, you can watch the beautiful people sunbathe and take their lunch. All gold buddhas, raised wooden decking and fluffy towels, I leant back, sipping on a tinto de verano, waiting for its part-owner David Bentley – and footballer friend Stephen Carr – to arrive.

It was a fun afternoon, but fortunately there is another side to the ancient town that was first inhabited by the Phoenicians, many centuries before the Romans.

The tragedy is that the vast majority of tourists who visit Marbella every year fail to find its very best part.

Take note: you head up the Golden Mile, so-called due to its expensive properties, where princes, presidents and pop stars have stayed over the last 50 years. Keeping the mountains of the Serrania de Ronda and the evocative peak of La Concha to your left, you will finally come onto Avenida Ricardo Soriano. Once here, look out for the shady tree-lined Plaza de la Alameda to your right and a line up of horse and carriages for the tourists. Park your car in the underground car park and head left up the hill.

Within minutes you will find yourself in another world. The historic part of Marbella is a warren of charming alleys, partly surrounded by the ruins of an old Arab wall, and with remnants of its old alcazar fortress.

At the heart of this pleasant web is the pretty Plaza de los Naranjos (Orange Square), the focal point of the town, dating back to 1485. Here you will find the 16th century town hall, scene of all the political shenanigans, a 17th century lawyer’s home, and a charming fountain which was installed by Marbella’s first Christian mayor in 1504.

Around the corner, look out, in particular, for the church Iglesia de la Encarnacion, a stunning 16th century affair, which was later remodelled in a Baroque style.

There are even museums here, with the Museo del Grabado Espanol Contemporaneo, which has works by some of Spain’s best artists, including Picasso, Dali and Miro.

Head uphill from Orange Square and you will find the amazing new Hotel Claude, a stylish place, where fashion designer Adolfo Dominguez and flamenco star Joaquin Cortes have recently stayed.

Cortes, who recently appeared at a couple of municipal functions, managed to slip away late at night to the fabulous old flamenco haunt of Ana Maria, sitting on one of the town’s most evocative squares.

It is here, well after the sun has gone down that practically every Spanish flamenco star – including Cameron de la Isla (who is photographed on the wall with owner Ana Maria) – has done a turn.

But Marbella has always been the haunt for celebrities, with the Swinging Sixties seeing the likes of jet-set figures such as Jackie Onassis, Frank Sinatra, Cary Grant, Ava Gardner, Audrey Hepburn and Brigitte Bardot.

Marbella still manages to pull in the stars, with Cheryl Cole, Simon Cowell and Jemima Goldsmith all recently relaxing here while Kate Moss and Prince Harry love the party scene.

The bad boys are also very much in tow, with Mark Thatcher, Adnan Khasshogi and James Hewitt all regulars on the party scene. Former cavalry officer Hewitt – who famously had an affair with Lady Diana – now has his own restaurant and bar here, the Polo Lounge.

There are plenty of other rumours flying around about Hugh Grant and Bjorn from Abba looking to buy in the area…and after Michelle Obama suddenly landed in the town for her summer holidays, anything could happen. But hey, that’s Marbella.