WHILE it may have lost its bid to become the 2016 Capital of Culture, Malaga at least has the highest-earning hotels in Spain.

The province just pipped Cadiz for having the most expensive hotels in Spain through the summer months.

It has emerged that Marbella’s hotels, for example, charge an average of 119 euros a night with Estepona coming in a close second at 96 euros.

The Cadiz resorts of Tarifa, Chiclana and Conil de la Frontera come in a close third. 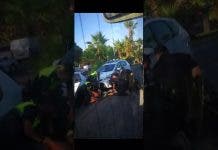 Laurence Dollimore (Digital Editor) - 14 Jul, 2020 @ 10:05
In a video of the arrest shared online, six police officers can be seen having to hold down just one of the men