It is good news for the town as there is a huge boom in the number of people coming to Spain for activity and green tourism.

Tourism experts estimate that 10 to 15 percent of the 60-plus million people who visited Spain in 2008 spent 4.26 billion euros on ecotourism.

Rarely a weekend goes past when Ronda does not have some sort of cycle, walking or running event taking place and there are numerous clubs and associations.

Traditionally, in May, the local army regiment ‘La Legion’ (or Foreign Legion) puts on its infamous 101-km race that snakes around the nearby hills.

A true feat of grit and determination, some 7000-odd cyclists, walkers and runners have up to 24 hours to complete the race.

If this all sounds a bit too stressful you might try some of the gentler guided cycling routes offered by local company Cycle Ronda.

According to its boss Dutchman Ferry Staleman: “Ronda is a lovely city, but the real beauty of Ronda is outside town. I am sometimes overwhelmed by the choices.”

You can hire bikes at his shop, or nearby at the shop of former Tour de France pro Jesus Rosado.

If walking is more your thing, then there are a series of excellent sign-marked walks heading off from the town in all directions.

A number head through the famous Tajo gorge, while others head off to ‘secret’ spots, such as the incredible fan-shaped cave, Cueva de Abanico, in a stunning nearby valley.

The famous GR-7, or ‘gran recorido’, which heads from Tarifa to Athens, also goes through the town, but it has been somewhat controversially cut off by developers a few miles north of Ronda to build a golf course.

It was this very development, known as Los Merinos, that led to an almighty battle with local ecologists and nature lovers a few years ago. 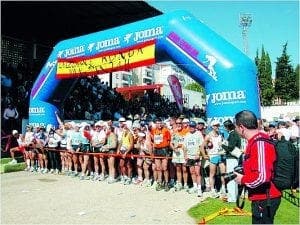 Interestingly, its opponents included one Alastair Boyd – aka Lord Kilmarnock – who was sometimes credited with planting the seed for Ronda’s outdoor renaissance.

Moving to the area in the 1950s to indulge his passion of horse riding and to write, Boyd wrote two books about his travels through the nearby sierras.

“Every man should have his own sierra,” Boyd wrote in his first book, The Road from Ronda, in 1967.

Curiously, it was his horseback travels that would later became a catalyst for Spanish conservationists in the
late 1990s.

When real estate developers threatened to over-run the mountain area around Ronda in the late 1990s and early 2000s, Boyd, a retired member of the English House of Lords, argued for development restraint and environment protection.

While the golf course scheme is still in the balance, the dispute weakened Boyd’s health and he died at 81 in March 2009.

For information on walks head to the tourist offices in town, or try and get hold of a number of good local books that give detailed walking info.