Por favor, una horca,” I ask the señora in the hardware store.

I make digging motions to indicate I need a garden fork.

She looks relieved, and says there are none in stock.

On looking up the Spanish for ‘horca’, I discover I’d asked for a gallows.

‘PINK IRONS’ AND OTHER FAUX PAS

Since buying and renovating a house in Spain in 2003, starting to build a new one there in 2006, and (over the past six years) spending from two to six months a year in our little mountain village, my friends have been asking, “So, how is your Spanish?”

“Well,” I reply, “I can say: ‘I do not want asbestos guttering’, or ‘Please paint the downspouts green’.”

As a rule, Spanish phrase books do not prepare you for actually living in the country – and certainly do not provide the necessary information for renovating or building a house. In an attempt to be able to communicate, I even attended Spanish lessons in South Africa; here’s an example from my study-book:

Mark and Mary are in the city of Mexico. They are from the United States and are strangers to Mexico. They speak little Spanish.

My language skills may not have improved much over the past six years, but I’ve produced some Oscar-winning performances and become an extremely skilled artist. Needle and thread? No problem: draw a picture of a spool of thread with a needle alongside it. Garden fork? Easy: throw your back into it, and make exaggerated digging motions.

This latter example, in fact, was a lesson in itself. I’ve realised that when I look up the English word for the Spanish translation, I must then make sure to look up the Spanish word, to see how it translates back into the English.

In my dictionary, I looked up ‘fork’. I knew that ‘tenedor’ was a fork (as in ‘knife and …’), but wasn’t sure if it would be the same word for the kind of fork I needed for the garden.

This is what the dictionary told me:

“Aha!” I thought. A fork for agricultural purposes is called a ‘horca’.

So I visited Conchi in the local hardware shop and, using my best pronunciation, asked for a horca. She looked at me, horrified. She looked even more upset when I made exaggerated digging motions. I finally resorted to drawing a picture.

“No, no, we don’t have any” … or words to that effect. I had the feeling she had a few dozen garden forks out the back, but wasn’t thinking straight any more.

The first thing I did when I got home was to look up the word ‘horca’ in the Spanish side of my dictionary. Its first translation is ‘gallows’. Its second translation is ‘a fork, as in the road, or as in the branches of a tree, from where they hang people’. Conchi maybe thought that I needed a gallows to hang my husband, and was then going to bury him?

On another trip to her hardware store (poor woman, she probably holds her breath every time I walk in), I asked for some string, as I needed to tie up a chicken to roast on the spit in the oven. (If you don’t tie up the legs and wings, they flap around something awful).

“No, the chicken is dead,” I said, doing my best dead chicken impersonation.

(So, do Spaniards generally tie up their live chickens by the leg, with thick nylon rope, to stop them running away, or from having it off with the cockerel, or something?)

My best ‘tutor’ in the village has been Juan, the owner of the El Altillo bar. He has been wonderful at helping me to correct my pronunciation, my sentence structure and my vocabulary.

Our son had come over for a visit. We met three lovely Dutch girls staying at a house in the village, and decided we’d all go out for dinner at El Altillo. Matthew translated the menu for everyone, and then placed our orders.

“Fantastic!” said Juan (in Spanish). “You come here for only a couple of weeks, and you speak Spanish like a local. Your mother, she comes here for five years, and all she can do is order a glass of red wine.”

“Hey, you cheeky sod, I understood all of that!” (Well, that’s what I wanted to say, but my Spanish wasn’t good enough).

And please don’t get me started on the English translation of Spanish menus. Why don’t the restaurateurs ask a native English-speaker to make sure the menu is comprehensible to the foreigners; I’d be happy to translate for free? On the other hand, we wouldn’t be able to enjoy such wonderful dishes as ‘pink irons’ – translated from ‘Rosada a la Plancha’, which is basically ‘fish on a plate’ … except that ‘rosada’ means pink and a ‘plancha’ is an iron.

One of the biggest obstacles to comprehension, however, has to be the Andalucian accent. One day we asked Juan when the football game was going to be on.

Juan patiently drew a picture of a clock, with the hands pointing at 1:45.

“Ah, dos minos quarto,” I said, emphasising the S at the end of the first two words.

I give up. So long as I can refuse asbestos guttering, get my downspouts painted green and order a glass of red wine, what more do I need? 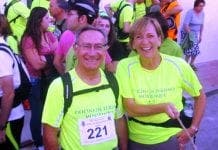 Competitor 501 – Did Not Finish