IT is the most endangered cat on the planet.

Yet many people in southern Spain are completely unaware that the last remaining Iberian lynxes are living right on their doorstep. And nearer and nearer every day, as it happens.

Twice the size of a domestic cat, with bigger paws, leopard-like spots and a brownish yellow coat, the species has been pushed to the brink of extinction over the last few decades due to a combination of reasons.

But, by an incredible turn of fate, things are finally starting to change.

According to the latest figures, there are now 253 lynxes living in the wild in Andalucia, including 82 cubs and 66 females.

This doesn’t, of course, sound like a lot for an entire species. But when you consider that this marks a staggering 148 per cent increase in numbers since 2002 when there were just 102 of them, it is all very encouraging.

Spread mostly across the two main areas – the Donana National Park, between Huelva and Sevilla, and the Cordoba section of the Sierra Morena – their numbers have swollen by 28 in the last year alone.

“It has been a remarkable comeback,” reveals Miguel Simon, director of the Life project, the EU-funded body in charge of protecting the lynx.

“In the last ten years the population in the Sierra Morena alone has doubled, and there has been a 50 per cent increase in Donana,” he told the Olive Press.

Some of the group’s conservation methods have been ingenious, including the introduction of supplementary feeding stations to make up for a shortage of rabbits.

Another measure saw the start of a breeding programme and in March 2005 an Iberian lynx, named ‘Saliega’, became the first of the species to successfully breed in captivity when she gave birth to three healthy kittens at the El Acebuche centre, in Donana.

That number has grown rapidly with a total of 47 lynxes so far born in captivity.

Another pioneering operation – known as ‘translocation’ – has seen animals moved between the Sierra Morena and Donana, to mix the populations and prevent in-breeding.

According to Simon, this method is proving successful. 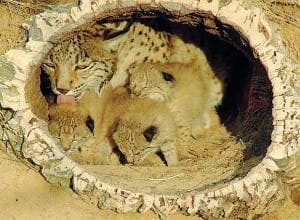 He said: “We released six individuals – three males and three females and one of the females has already had two cubs, so we feel very optimistic.”

At last, things seem to be looking up and the project is slowly moving towards the goal of removing the cat from the critically endangered list.

It would be a huge blessing for a cat whose Iberian roots are traced to 4500 BC.

For thousands of years – indeed until the mid 19th century – the lynx thrived in Spain, enjoying a habitat of open grassland mixed with dense shrub.

But from the beginning of the 20th century the lynx started to become increasingly uncommon in northern Spain, with only 100,000 individuals left throughout the Iberian Peninsula.

The huge decline had been for a range of reasons, including poaching, road accidents and the shrinking of their natural habitats.

But the single greatest factor was to do with their diets and primarily a lack of rabbits.

In 1952 a French doctor released a disease called Myxomatosis to protect his vegetable patch in the south of France, but it quickly spread and by 1959 had killed up to 95 per cent of the rabbits in most of Spain.

And, as their prey died out, so did the lynx.

For a while, the situation did improve – rabbits breed like rabbits, after all, and it didn’t take long for the population to show strong signs of recovery.

However, in 1988 a second pandemic, this time the viral infection VHD, struck in Spain, once again obliterating the population across the peninsula.

There are still many obstacles standing in the way of survival

Today, the rabbit, like the lynx, is entirely absent from northern Spain with the survival of the two species closely entwined.

By incredible luck the species managed to hang on in two parts of Andalucia, and since the 1990s the battle has been on to prevent it becoming the next sabre tooth tiger.

But there are many obstacles still standing in the way of survival.

Aside from the tragically regular news that lynxes have been run over, a new threat is endangering the species.

The latest problem is a chronic kidney disease (CKD), which was first detected in 2009.

It is the single biggest blow to the program this decade and has so far affected 40 per cent of the 77 individuals in captivity.

While only four cats have so far died from the disease, it has seriously debilitated the group.

“Thankfully it does not seem to have spread to those living in the wild and for the time being at least we have managed to stabilise it here.”

If they can get this disease under control it is hoped some of the lynx in captivity will be released into the wild next year.

Best of all, after 16 years of hard work and investment the Life project has reached the stage to consider downgrading the lynx’s endangered status.

Indeed it is currently drafting a plan to move the species from the ‘critically endangered’ list to merely ‘endangered’ between 2011 and 2016.

To achieve this goal, conservationists will need to ensure there are at least 50 territorial females in Sierra Morena with a further 25 in Doñana.

It has been agreed that they will also need to create at least two new population centres with 10 territorial females in each one.

This has already begun in northern Jaen.

After years of careful planning, conversationalists have successfully reintroduced the lynx into the Guarrizas area.

And following much discussion it has been decided this month that this will also be the location for the very first reintroduction of a lynx born in captivity.

Another area, Guadalmellato in Cordoba, where the Iberian lynx disappeared in the late eighties, has also been home to a pilot project to reintroduce the lynx.

Following the release of lynx into the area last year, two cubs have been born this year bringing the total up to eight in the area.

Conservationists are also hoping to reintroduce three new populations in Portugal where the lynx was once strong.

“Ultimately here in Andalucia we want to have at least two lynxes per hectare, three would be ideal, and four even better,” concluded Junta environment boss Javier Madrid. If this were to come about, the lynx would finally lose its stigma as the world’s most endangered feline, and instead become a much-needed symbol of conservation success.

Only then perhaps might the people of southern Spain finally catch a glimpse of this beautiful cat, that for centuries has been living right on their doorsteps.