After a gap of a few years Paul Whitelock has a garden again. Being a keen gardener and having had a garden in England for all his adult life, it was a source of some regret that for the first few years of living here in Andalucía he was garden-less, only having the house he stood up in, so to speak.  Having moved house recently, that has all changed – and how!

Just over a month ago we moved to a finca in the campo and not only do I have I lawns to mow, beds to weed, and trees and bushes to prune, I have a huge field measuring 61 áreas and 22 centiáreas and a major flooding problem!

In the field, which is 7,346.40 square metres in real money, I intend to create a small huerta to grow my own fruit and veg. Courgettes, French beans, potatoes, strawberries, tomatoes, which I used to grow successfully in Cheshire; but also avocadoes, peppers, onions, garlic, and squashes, as well as my own fresh herbs.

What am I going to do with the rest of the field? In the past a Spanish neighbour has used it for grazing his horses, which I may allow to continue in the short term, although I’ve been approached by another neighbour who wants to plant a crop of broad beans. I might also contact one of the two local vineyards to see if they want to plant vines in exchange for several cases of wine each year! Or maybe we could build an urbanización and make a mint! (Only joking!)

As for the flooding problem, shortly after moving in five weeks ago we realised a large part of the back garden was soaking wet. Then we had torrential rain for over a week which left half of said garden waterlogged – about 2,000 square metres!

We investigated the field and unearthed – literally – an old system of albercas and acequias designed to distribute water for irrigation from a spring higher up the hill to the local neighbourhood. It was neglected, totally overgrown and the pipes were blocked. Small wonder then that the continually running water from the spring had to find somewhere else to flow and so had created several small streams heading downhill, mostly in the direction of our garden.

The alberca, a concrete water tank designed to hold about 40 cubic metres of water, was empty – correction, it was about 10 cm deep in earth and sediment that had collected over the years and was now a mass of weeds. My stepson and I spent half a day clearing this and discovered the inlet pipe was blocked. Once we’d freed this, water began to flow into it from a pozo around 20 metres higher up the field, and by the following day the alberca was full and the water was flowing via underground pipe to another chamber 20 metres further down and then another just near our garden fence. From there it was just spilling into the garden.

To solve the problem we built our own little stream alongside the edge of the lawn, which flows into the main arroyo at the back of our site and then further on down into the river Guadalcobacín. Within half an hour of completing the stream, the standing water and pools in the flower beds had subsided and today, just three days later, it should be dry enough to mow for the first time.

We still need to investigate why water is overflowing at the bottom chamber, but for the moment the sound of a gurgling brook flowing through our garden is a very pleasant sound indeed, added to the birdsong, the cluck of chickens and the barking of distant dogs … and the sound of trains passing on the nearby Ronda to Algeciras railway line and the lengthy practise sessions of the Spanish Foreign Legion band at the barracks across the way, but Spanish noise is the subject of another article … 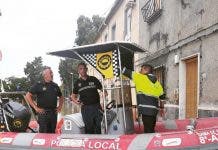 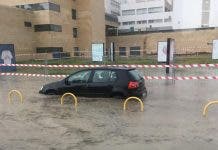 WATCH: Heavy rains cause havoc in Cordoba and its Reina Sofia Hospital while others become trapped in car 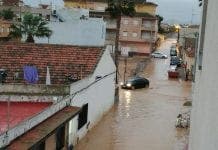 Isha Sesay - 22 Sep, 2020 @ 07:34
According to the police statement, the crew had denied the Brit alcohol during the flight due to him already being heavily intoxicated