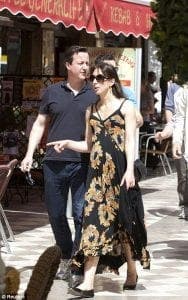 IT is his first holiday abroad since he became Prime Minister, but David Cameron looks just like any other tourist.

This week he whisked his wife away for a two day bargain break in Granada to celebrate Samantha’s 40th birthday on April 18.

Shunning the publicity that other celebrity visitors have courted – such as Michelle Obama last summer – the pair chose to fly with budget airline Ryanair and stay in a three-star hotel in the Realejo, the ancient Jewish quarter of the city.

After a two-hour flight to Malaga the pair was driven to Granada, where yesterday morning they visited the stunning Alhambra palace.

Mingling with the other tourists – hand in hand, in casual clothes and escorted by national police in civilian clothes – the Cameron’s could be seen stopping to take money from the ATM before indulging in some local cuisine. 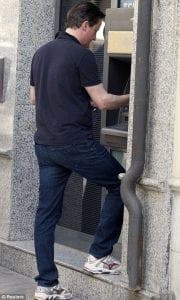 After a morning sightseeing the Prime Minister and his wife lunched in the El huerto de Juan Ranas, a restaurant opposite the Mirador de San Nicolas.

But there was no fanfare to mark their arrival.

Restaurant owner María Angustias del Castillo explained: “They didn’t book a table, just half an hour before they came their security guards came to warn of their arrival.”

On the menu was porra Antequerana for a starter with alpujarreño for main, all washed down with a glass of red wine for David and rose for Samantha.

Angustais, who said the pair was nice and friendly, added: “For dessert they asked for tiramisu. The couple was quiet and just enjoyed the wonderful views from here of the Alhambra.”

The pair’s secret visit – which ends today – comes just days after the Prince of Wales and Camilla also took a sojourn around Andalucía that ended with a stay at the Dehesa Baja estate in Illora.