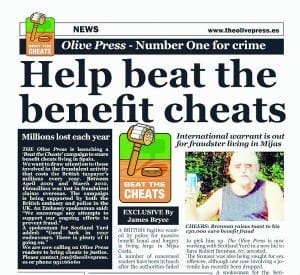 WITH summer fast approaching, Spain is again bracing itself for an onslaught of Brits looking for their annual fix of sun, sea and sangria.

The Costas traditionally attract a significant amount of holidaymakers from the UK and across Europe, while a sizeable and largely law-abiding expat community now call the region home.

But beneath the sun-soaked exterior of the Costas lies an unwanted element that continues to tarnish a stretch of coastline keen to shake off its ‘Costa del Crime’ tag.

The issue of benefit fraud is one that authorities are particularly keen to stamp out, as demonstrated by the establishment of a dedicated fraud hotline for expats in Spain.

But so called ‘abroad fraud’, where Britons claim benefits back home while living in Spain, is a problem that refuses to go away.

Such a big problem, in fact – estimated at 80 million euros a year – that the UK authorities are launching a fresh purge on the problem, joining forces with their counterparts overseas to find new ways of addressing benefit fraud.

Fraud investigators at the Department for Work and Pensions (DWP) are working alongside the land registries, the Foreign Office and UK banks to identify offenders.

“We are determined to clamp down on benefit fraud abroad,” a DWP spokesman told the Olive Press.

“This money should be going to the people who need it most and not lining the pockets of criminals sunning themselves on taxpayers’ money,” she added.

1. People not declaring that they have moved abroad
2. Unreported deaths – where relatives or other third parties continue to claim
3. Working overseas
4. Unreported assets – such as properties, savings or even yachts
5. Exaggerated disability

The problem, of course, is not just confined to Spain, with other European countries including Greece and long-haul destinations, such as America and Thailand, also housing numerous fraudsters looking to go unnoticed.

But it is in Spain, and particular the Costas, that has the unwelcome distinction of having the highest number of offenders.

In one case, a woman from Sussex pocketed nearly 19,000 euros in benefits over a two-year period in the UK, despite living in Spain.

Georgia Parsons legitimately claimed housing benefit and council tax benefit on a rented flat in Brighton, but then sub-let the property while she stayed at the infamous alternative commune called Beneficio – ironically, the name itself a play on words meaning ‘benefit’ – near Orgiva, in the Alpujarras region.

Parsons was handed a nine-month sentence, suspended for two years, following the scam which involved forging a letter from her landlord to convince council officials that her tenancy had been extended.

The single mother started claiming for the flat in 2005 but council officials believe she had been living in Spain since 2006.

Another Briton, who has lived in Fuengirola for the last eight years and wished to remain anonymous, summed up the extent of the problem and the size of the task facing the authorities.

ONE British benefit cheat living in Spain, Robert Telford, pleaded guilty in March to receiving overpayments of income support and pension credit amounting to 31,000 euros over a period of three and a half years.
He must now repay all of the overpaid benefit, and was sentenced to a 12 month Community Order for 120 hours of unpaid work.

“I know of people who are claiming benefits fraudulently down here, it is very common, and plenty of them boast about doing it” he said.

Another local resident – who also begged to remain anonymous – added: “Some of them will go hobbling along to collect their disability allowance and then you’ll see them walking around on another day without a care in the world.”

One pensioner told the BBC last year: “There’s people I know who claim disability allowance who certainly go into the local offices in wheelchairs who you can see down here dancing in the winter months.”

Another man told the same program that he had lived in Spain for years and had found it easy to fund his lifestyle with illegal handouts.

He explained how he got help after answering an advert in a newspaper that offered to help people to fill in claim forms.

The clue of getting benefits was to know how to fill in the forms. To know what to put down.

“This guy had a business where he filled in the forms for you,” explained the pensioner. “He didn’t only get you your benefits, but back-pay as well.”

For this is how the system works… the so-called ‘needy’, filling out forms using professionals, and then turning up once a month at post offices to collect their giro, which they can then put in their accounts.

But the noose is tightening. The DWP team in Spain continues to grow, as much to help expat residents, it should be stressed, as to clamp down on fraud.

There are currently six people working in the department at the British consulate general in Madrid, dealing with pensions, benefits and welfare.

Boss Hannah Thronicker told the Olive Press she believes, in some cases, claimants are inadvertently committing fraud without realising it.

“Some people choose not to inform the DWP of changes to their circumstances, while others get themselves into a situation where they are unwittingly committing benefit fraud,” she said.

“The longer people put it off, the worse it gets, so people should contact the authorities if they are unsure about what they need to declare. The fraud line is confidential so anyone with concerns about reporting a benefit cheat can be assured that their anonymity will be protected,” she added.

Benefit claimants must tell the authorities if they are planning to go abroad.

Those who claim benefits that they are not entitled to while abroad could face prosecution, imprisonment or the confiscation of their home and possessions.

“We call on British residents and visitors in Andalucia and other parts of Spain to cooperate with the authorities if they know or hear of anyone claiming benefits to which they are not entitled to,” the DWP spokesman added.

The Olive Press launched its ‘Beat the Cheats’ campaign after appealling for information on Briton Robert Brennan, who fled to Spain after being convicted of a 130,000 euro benefit fraud back in the UK. We are calling on readers to bring more cheats like him to justice.

VOX POP: The Olive Press asked Brits on the Costa del Sol what they think about benefit fraud

‘I try not to think about it because it winds me up but it should definitely be clamped down on. They should work harder to crack this as it would save millions. I have never claimed benefits but there are plenty of people I know who do play the system.’Keith Johnson, 52, Manchester – Holidaymaker

‘I don’t really know how it all works but it’s wrong that people should be able to get away with claiming benefits that they are not entitled to. They should get a job like everybody else.’Alan Shaw, 47 – Benalmadena

‘I know it’s wrong but I don’t really blame people who do try to get away with it. There are hardly any jobs anymore and the government hasn’t done anything to help the situation so it’s inevitable that more people are going to try and claim benefits, especially if they know they can get away with it.’
Matthew Stephenson, 32, Torremolinos