POLICE yesterday used radar equipment to scour a family home for clues in the disappearance of two children still missing after 12 days.

Ruth Breton Ortiz, six, and her brother Jose, two, were last seen alive by their father, Jose Breton Gomez, 38, whom police arrested in connection with the disappearance on Tuesday.

Accompanied by his lawyer, Mr Breton was taken in a police vehicle to witness the search of his parent’s home in Las Quemadillas industrial estate and its surrounding orange groves.

Mr Breton says he lost sight of his children for ‘a moment’ in a Cordoba park, but there is no footage of him with the children and nobody saw him in the park with the youngsters.

He has been accused of making ‘false statements’ and can be held until tomorrow morning in the absence of new evidence or a confession. 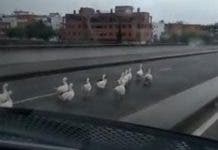