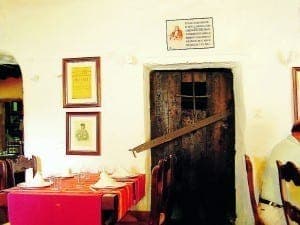 ABOUT the biggest hazard you will meet on the back roads of the Axarquía is a herd of goats, a lorry overloaded with farm produce or a hostelry inviting you to dally for a lazy hour or so.

But it was not always so. Bandoleros – or bandits – were once a major feature of life in this area.

Colourful types though they were, it did not make the experience of having your valuables purloined at the point of a blunderbuss any pleasanter.

In the years following the Napoleonic Wars, so lawless were the roads that the English writer Richard Ford advised travellers to bring along “a decent bag of dollars” to appease any highwaymen you might meet.

He also suggested carrying an impressive-looking watch, noting; “The absence of a watch can only be accounted for by a premeditated intention of not being robbed of it, which the ladrón considers as a most unjustifiable attempt to defraud him of his right.”

One of the most notorious 19th-century bandits was El Bizco (the one-eyed bandit). They remember him in his birthplace, El Borge.

Take a ride up there and witness how the landscape becomes steeply undulating, clothed in olive groves and vineyards.

Several streets are named after revolutionary heroes such as Che Guevara, the legacy of a leftwing, anti-monarchy mayor who often made headlines with his controversial decisions.

The Mudejar-Renaissance Rosario church is impressive, with immense pillars supporting its three naves. Look for two holes in the weather-vane atop the church. They were allegedly made by El Bizco’s shotgun.

The vane had never worked but — after he blasted away — it functioned perfectly.

Otherwise El Bizco’s record is pretty gruesome. With his comrades in crime, Frasco Antonio and Manuel Melgares, he terrorised the whole area. At times, these cut-throats were used by unscrupulous ‘caciques’, powerful land-owners, to sway local election results.

Wander down a maze of narrow streets and at the bottom end of the village you find the olive mill where El Bizco was born. It has been converted into the Posada del Bandolero, combining an attractive hotel, restaurant and museum. At the side of the bar you can see the original mill-stones and a deep well.

El Bizco’s chum, Melgares meanwhile, is said to have committed one of his most daring crimes in Frigiliana (six kilometres inland from Nerja).

Disguised as a priest, he entered the Ingenio, the mansion owned by the Counts of Frigiliana, pointed a pistol at the manager and made off with around 100,000 pesetas.

Frigiliana was a flash point in the 1940s when anti-Franco guerrillas based in the adjacent sierras sought to provoke a general revolt. In a bid to discredit them, Franco’s tightly controlled media labelled them ‘bandoleros’.

If you hike into the mountains with their abrupt inclines and deep gorges riddled with caves, you can see how difficult it was for the Civil Guards to track the guerrillas.

High up, near a pass called the Puerto de Frigiliana, lie the ruins of the Venta Panaderos. Once this inn was a welcome rest stop for muleteers en route to Granada and a meeting place of footpads, smugglers, guerrillas — and Civil Guards.

Locals tell anecdotes about how the guards would suddenly arrive, discover meals which the guerrillas had ordered and proceed to scoff the food themselves.

Just east of Nerja is the Río de la Miel valley, a delightfully peaceful spot but once a refuge for smugglers.

When guerrillas landed from North Africa, they trekked up this valley to their bases in the mountains and Río de la Miel became such a breeding ground of resistance that it was called ‘Little Russia’.

El Tempranillo’s claim was: “In Spain the king rules, but in the sierra I do”

Almost every village has some tale to tell about smugglers or bandits. Such as Benamargosa, up a well-watered valley northwest of Vélez-Málaga.

A couple of centuries back it was dubbed Gibraltar Chico (Little Gibraltar) because the inhabitants were renowned as smugglers, particularly of tobacco.

These days Benamargosa likes to think of itself as the Oasis of the Axarquía. The sheltered environment and benign climate allow tropical fruits such as mangoes and avocadoes to flourish on the fertile lands bordering its river.

Perhaps most famous for its association with the lawless past is a lonely inn standing on a crossroads at one of the highest points of the Axarquía.

To reach it, you take the old road from Málaga to Granada, the A6103. It weaves its way through the forested Montes de Málaga then past limestone crags to the Venta de Alfarnate.

First opened in 1691, this inn, standing beneath the rocky buttress of the Tajo de Gomer, claims to be the oldest in Andalucia. At weekends it is crowded as “domingueros” (trippers) tuck into roast kid, partridge and pork.

In the past all manner of travellers stopped here. A plaque notes: “In this Venta on April 21 1850 the Mail on the way to Málaga was stolen by a group of 12 armed men. The bandits took particular care to seize a packet of Government prosecutions and criminal lawsuits coming from the Granada chancery.”

On one occasion in the 19th century, a horseman rode up as the customers were tucking into gazpacho from a common bowl.

Told there were no spoons left, he used the crust of a loaf to scoop up the cold soup — then produced a pistol.

They recognised him as El Tempranillo, Andalucia’s most notorious bandolero, whose claim was: “In Spain the king rules, but in the sierra I do.”

They were forced to chew their wooden spoons.

On other occasions, El Tempranillo was more gallant. Always courteous, if he stripped a lady of her best jewellery, he would kiss her hand and assure her: “Such a pretty hand needs no adornment.”

Truth to tell, those bandits were hardly a bunch of Robin Hoods. Most would have robbed their own grandmothers given the chance. But time has cast a romantic aura over them, popular mythology has embroidered their characters and their memories have been enshrined in everything from museums to the names of gourmet dishes.

Ford maintained that travellers often exaggerated the bandit peril. When he inquired about thieves, “according to all sensible Spaniards, it was not on the road that they were most likely to be found, but in the confessional boxes, the lawyers’ offices, and still more in the bureaux of government.”

Learn more about the outlaws in Francisco Montoro Fernández’s book Bandoleros de la Axarquía (Acento Andaluz). David Baird is the author of East of Malaga (Santana Books), the definitive guide to the Axarquía, as well as Sunny Side Up — The 21st century hits a Spanish village and Typhoon Season. These are distributed by Maroma Press (http://maromapress.wordpress.com/).