I’VE been in Spain long enough to realise that Christmas is different to what we’re used to in England. I’m sure every expat feels that it’s not quite the same, whether they love or loathe the festivities in their elected homeland.

Friends back home tell me the Christmas displays hit the shops as soon as the schools go back in September, and get into full swing by mid November when the z-list celebs are rolled out to turn on the Christmas lights in market towns everywhere. We were dumbfounded when flying via Lisbon airport in October to see two fully decorated Christmas trees in the international terminal. Having got over the shock of there also being three Harrods establishments in the small shopping and cafe area, we decided to blame the British influence for the premature decorations.

For me, the season really starts to get festive when Spain celebrates Constitution Day and the Immaculate Conception on 6th and 8th December. That’s when I start planning my present list, mix the Christmas pudding and bake the Christmas cake so that it can be fed with brandy regularly up until it’s iced nearer to the big day. Christmas 2012 is going to be very disorganised if Mr Rajoy suspends my beloved early December Christmas preparation days off work! He can have the rest of the bank holidays if only he’ll just give me these two!

Before you know it, 25th December is rapidly approaching, at least one internet supplier has failed to deliver, you’ve run out of wrapping paper / sticky tape / gift tags (delete as appropriate) and the guilt is mounting as the Christmas cards continue to flood in despite the fact everyone knows WE NEVER SEND CARDS!

Christmas Day arrives and, in our household at least, presents are unwrapped, paper strewn everywhere, and a true festive feast is duly inhaled by humans and dogs alike and then…

I hanker back to those days working in England (not something I do very often) and long for the shut down week between Christmas and New Year when most office staff don’t work because, after all, nothing gets done anyway. Christmas Day bleeds into Boxing Day and the sales drag us all hopping and skipping back to the shops, where we sneakily return those ghastly presents from great Auntie Maud.

We relax, bicker, argue and generally enjoy a break from work before partying on down with the rest of the New Year’s Eve revellers and recovering the next day with another feast. No presents to foist upon each other but, instead, the important deliberations, decisions and declarations of our New Year’s Resolutions to be made. Festive week over? It’s back to work, full of our good intentions and enthusiasm after a good rest and ready to take on the world and a brand new year.

On the Costa del Sol it’s back to work on Boxing Day so that clients can come in to pass on their Christmas greetings, use our internet and print off their boarding passes. Bizarrely not so many are interested in buying houses between Christmas and New Year. The phone stays silent, junk emails keep us entertained as there are no others to read and we wade our way through the gifted boxes of chocolates while gazing longingly out of the window at the British tourists enjoying their shut down week. Bah humbug!

New Year revelry is somewhat more sophisticated among the expats and holidaymakers here and New Year’s Day passes similarly to a traditional Sunday with everywhere closed except for some hardworking restauranteurs and bar owners.

While we may make our New Year’s Resolutions, there’s no point in starting them just yet because there’s still one more festivity to come and, let’s face it, in Spain it’s the Big One! On 5th January, the streets will be rammed with families admiring the parade and greedily using old carrier bags and upturned umbrellas to catch sweets being thrown from motorised floats by the Three Kings and their assistants. Spanish children will rush early to bed in excited anticipation of what the Three Kings riding their camels will deliver to them in the dead of night.

The next day is another big family event with feasts and presents galore. I always feel a bit sorry for the Spanish children – all that time waiting for their presents while Father Christmas delivers to the expat children and no sooner have they got theirs from the tardy Three Kings, then it’s back to school!

So you see, there’s no point in starting a new diet or exercise regime until the third and final festivity is over and eaten. Then, I promise, I’ll dedicate some time to those resolutions. What were they again? 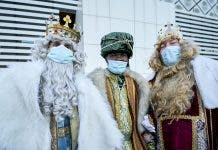