SINCE the launch of Spain’s first high-speed railway in 1992, the glamourous, sleek AVE trains have been the envy of the world and made Spain undoubtedly the world leader in the field.

Advising the US on its own high-speed aims, as well as recently signing a deal to install an AVE line in Saudi Arabia, the industry shows no signs of hitting the buffers.

Indeed, over the last few years more and more high-speed tracks have been snaking their way across the country. And with already over 2,200 kms of high-speed lines laid, the country is second only to China in terms of distance.

Now, thanks to a new priority project called the ‘Mediterranean Corridor’, the country can go one step further.

Partly funded by the European Commission this new line aims to connect Algeciras with the rest of Europe, going via the key Mediterranean cities of Barcelona, Valencia and Almeria.

But it has remarkably little to do with moving passengers fast.

All part of the ‘Trans-European Transport Network’, it is actually about freight… and – more specifically – moving it more quickly around the continent.

The scheme is certainly exciting in that it will eventually link southern Spain’s deep water port of Algeciras with Russia in the north. And even more ambitious, it may one day join Africa via a tunnel or bridge across the Straits of Gibraltar.

As far as European and Chinese commercial interests are concerned – and this is the key motivation behind the scheme – it is a much needed step.

As the EU insists: “If Europe is to fulfil its economic potential, it is essential to build the missing links and remove the bottlenecks in our transport infrastructure.”

But for the people who live in the path of this new line, the benefits are not so clear cut.

While fast passenger trains are sexy and exciting, rumbling freight is certainly not.

Indeed, there is a joke among lawyers in Spain that ‘it is better to be a bird of prey here than a human with property’.

The reason being that often the only thing that stands in the way of development plans – be it for a motorway, a new golf course or indeed a new railway line – is a rare and protected bird or animal.

Quite rightly, the environment ministry attaches great importance to the discovery of rare birds, which have to be carefully assessed and can even completely alter the project.

On the other hand, people’s homes and the scenic views that surround them, can be demolished with little consequence.

And here comes the rub: This apparently even includes popular tourist areas, and well-established and successful hotels.

This has certainly been the case with the intention of ploughing the Mediterranean Corridor through the heart of Ronda’s key tourist valley. 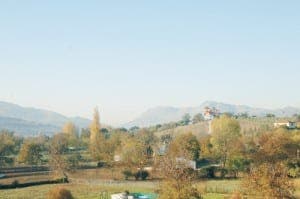 As reported in the Olive Press in recent weeks the section from Antequera to Ronda and beyond, threatens to cause ‘total destruction’ for Llano de la Cruz valley, where British Prime Minister David Cameron and celebrities including DJ Fatboy Slim and actor Adrien Brody have previously stayed.

According to the published plans, the route – costing 711.47million euros – will run alongside the existing track and should therefore have ‘less environmental impact’ than five other proposals.

But with suggestions of between 24 and 80 freight trains a day – some up to 700m long and running through the night – it is quite understandable that around 40 ‘turismo rurales’ in the valley and seven hotels are fearing a major loss of business.

Of even more concern though is that the authorities actually intend to install an even more damaging line right through the middle of the valley.

Despite Ronda’s new mayoress insisting otherwise, there is scepticism that the apparent ‘preferred’ option could be changed at the last minute – as has happened in other parts of Spain.

Certainly, research into a new AVE station for Ronda at La Indiana has been going on for five years in such detail that it is difficult for many locals to imagine that the so-called ‘preferred’ route will be selected.

“We cannot see how the new fast track train plus all the extra freight would stay on the existing line,” claims businessman Nick Smallwood, whose upmarket rental home Finca La Morera (voted by the Daily Mail as being in Spain’s Top Ten places to stay) could lose much of its gardens if the second option was chosen.

“It just does not add up. It is far too windy and will slow things down dramatically.”

In some cases – certainly in the case of Fuente de la Higuera, one of Andalucia’s top boutique hotels, included in famous guides like America’s Mr & Mrs Smith – it could well cause their closure.

“But, wherever this train comes through the valley, it will destroy a lot of livelihoods and lay waste to the area’s natural beauty,” insists Smallwood.

“I mean who is going to want to stay here if a train wakes them up every 15 minutes?”

The massive effect for Ronda and its surrounding Serrania would be catastrophic, claim the owners, who estimate that upwards of five million euros could be lost each year from the projected drop in tourism.

“This is money spent in local restaurants, buying local artefacts such as leather goods, renting bikes, horseriding and visiting bodegas,” explains another owner Mike Winn, a successful UK businessman. “The knock on effect will be enormous.”

This is confirmed by the Dutch owner of a cycling business in Ronda, Ferry Staleman, who estimates he gets between 400 and 500 clients from the valley each year alone.

“The type of people who stay in the valley are Andalucia’s best clients, cultured, environment-loving tourists, who have money to spend,” he explains. “Why would Ronda allow that to be tampered with?”

It is a question for the mayoress, who insists bringing a freight line through the valley is ‘important’ for the local economy, although it is hard to see how.

Freight is highly unlikely to stop there. A planned freight ‘dry port’ is already being built near Antequera and, according to regional plans, Ronda will not be allowed to construct one.

Perhaps blinded by the promise of an AVE fast track train finally arriving in the so-called ‘City of Dreams’ (a somewhat appropriate moniker for the city, given the valley’s predicament), she is not opposing the line.

The real crux, of course, is whether any additional tourism the AVE will bring to Ronda can offset the tourism that would be lost in the valley on account of the noise and loss of nature.

Going on existing statistics, it is already well established that the AVE is not a major source of new tourism. One only needs to look at the handful of tourists who are using the new AVE station in Antequera, for example, while the AVE link between Toledo and Cuenca was actually closed down this year after it emerged that only 16 people were using it a day.

As Brian Simpson, the Chairman of the European Parliament’s Transport Committee, insists it is vital not ‘to politicise’ railway infrastructure and “high-speed trains are not cheap”.

That said a greater shift from road freight to rail has significant financial and environmental benefits for Europe.

Currently, 96 per cent of freight crosses Spain by road, compared with around 15 per cent in France, and almost 20 per cent in Germany.

“Spain must get closer to these figures,” argues Cristian Bardají, from the Barcelona Chamber of Commerce.

He also insists an improvement in transport in Spain would help attract trade traffic between Asia and Europe, which currently mainly uses Northern European ports.

“75 per cent of ships from Asia arrive in northern Europe and the objective is to bring this percentage to 60 per cent.”

But while the freight line will help to make this a reality should it really come at the expense of such a crucial tourist valley for Andalucia?

“We believe the only real solution is a tunnel through the valley,” concludes Smallwood, who hopes the authorities come to appreciate that.

Now, despite hundreds of allegations against the project going in by the deadline last week – not to mention a 500-strong local petition – the valley’s hoteliers and residents are praying the authorities come to their senses…and looking to the skies in the hope that a rare eagle will come and build a nest!

What is the Mediterranean Corridor?

THE Mediterranean Corridor is Europe’s key freight transport network which will link Spain’s Mediterranean coast with the rest of Europe and Russia.

Backed by the European Union, it has a projected cost of 51.3 billion euros, with Brussels paying 20 per cent.

Some 25.4 billion euros is being invested up until 2020, when the service will start being operative between Perpignan and Almeria.

A total of 1,300 km of lines will be laid along the Mediterranean coast from Barcelona to Almeria, where it will then cut inland to Granada, then to Antequera and Ronda and finally arrive in Algeciras.

According to the former Minister for Public Works, Jose Blanco, the route ‘will break 500 years of centralization.’

However, the new Spanish Government has not abandoned an old project ‘the Central Corridor’, which heads from Algeciras to Madrid and then to France, returning to centralist logic and basing the decision on political rather than economic criteria.

Of course, either corridor will provide a link to the 39km long railway tunnel or bridge planned to run under the Straits of Gibraltar to connect Spain with Morocco – making it easier for goods from Africa to gain swift access to Europe.

Kimberley Mannion - 27 May, 2022 @ 08:00
MORAIRA Plumbing Heating is a family run business which has been operating in Spain for more than 22 years, opening its Costa Blanca office...