THE mother of missing youngsters Ruth and Jose Breton has broken her silence and accused the children’s father of being to blame.

Speaking publicly for the first time, three months after the children vanished from Cordoba, Ruth Ortiz called on Jose Breton to speak out about what happened.

“Everyone that knows Jose Breton knows that he did not lose the children, and those that don’t know him can be sure that I know what I am talking about,” she said.

“He has to tell the truth. He is responsible for the disappearance of my children and he must speak.

“His family also knows that he is to blame, but for them it is easier to cling to the hope that they were lost rather than accept the stark reality.”

Ortiz was addressing a crowd of over 350 people who gathered in Cordoba three months after the children vanished to hold a 30 minute silence.

Ruth, 6, and Jose Breton, 2, have now been missing for over 90 days but despite extensive searches of Bretons home and that of his parents on the Guadalquivir River, police are no closer to finding out what happened to them.

Their father, who has been in prison since October 21, insists he lost track of them while walking in the Cruz Conde Park in Cordoba.

Meanwhile Ortiz has vowed to continue fighting until she learns the truth. 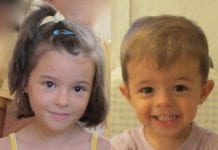 3am arrest of missing kids’ dad in Spain