Golly chaps, it’s Geocaching time with the Famous Five. The world is reliving their childhood with a mischievous treasure hunt that is guided by a virtual network of clues. Warning: childish behaviour is inevitable!

PICTURE this: A top secret drop-off, “I shall only say this once” in a French accent, a set of clues reminiscent of Enid Blyton’s Famous Five, mixed with a kamikaze-style hunt for the bounty, and some technology that would make Q jealous (James Bond, duh!) It’s the ultimate action movie fantasy. So, five meddlesome kids set off on a weekend of sweeping areas with Spook precision and having a spiffing time. “I say, he’s a jolly good sport.” (This was not the case.) 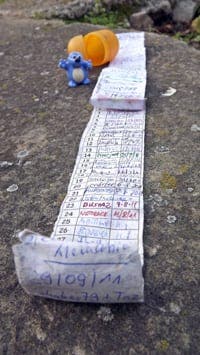 In everyday life, I despise looking for things. I make very half-hearted attempts at searching for that lost earring, or that book that was due back at the library two months before. I quickly revert back to the idea that the Borrowers probably do exist, hence my search is futile. However, there was a real life treasure hunt to conquer in Pamplona, and my mum wasn’t there to find it for me.

Saturday, Pamplona, oh-six-hundred hours. It was the break of dawn. We had a route of 10 ‘caches’ to locate. Armed with a map, a compass, a spade (okay, actually a large kitchen spoon) and accompanied by a team of five equally excited comrades, we anticipated the real life Easter egg hunt that is Geocaching.

Geocaching is a virtual phenomenon. It calls on many skills; childish imagination, a little adult curiosity, a slightly geeky understanding of coordinates and some up to date GPS technology, or a good map and an acute sense of direction, if you like. The idea is simple. Like the online world of ‘couch surfing’, you discover a city from their eyes. People sign up to the website, hide a cache in a secret place in their city, and post its whereabouts in the form of coordinates. Some give hints about its exact location, often in the form of exciting cryptic clues. Inside the cache, people leave little offerings, which you can swap for something. There’s also a list you can sign to immortalise your moment in that place. It is as simple as a cave painting, yet as techno-fied as an iPad. Coincidently, that would be the perfect utensil for the task but I’m still stuck in the dark ages, so I grabbed one of those plotting compasses and a tourist map to mark out our adventure like a seaward voyage.

In each location around the city, we searched high and low for our hidden treasure

In each location around the city, we searched high and low for our hidden treasure. There was no real prize, but the competitiveness was at an all time high. Any murmur of “found it” led to a scramble of bodies to the site, each racing to claim the first spot on the list of names. A finger was bent back in the process. “Don’t be such a baby, Anne.” We kamikazied around a little pillared park. We swept along the city walls with sniffer-dog senses. We spent a long time looking under rocks inside the old castle walls. We stumbled on a graffitied industrial park – this site provoked some Mission Impossible-esque manoeuvres in order to unearth our bounty. Each cache had a long list of people’s names, dates and nationalities. Every name had shared the same hunt, seen the same view, felt that same wonderful exhilaration that comes with knowing a secret.

It is difficult to say who won the Geocaching adventure, especially because a banned device with GPS was later discovered in the pocket of a strong competitor. By George, what a horrid cheat! Nevertheless, it was just plain mischievous fun.

“This has boiled up into quite an adventure, hasn’t it Timmy?” And it’s on your doorstep. The website talks about discovering “the world as you search for the cache.” But don’t just discover a place, live out a fantasy. Will you be an MI5 operative saving the world from disaster by finding that vital microfilm in a Kinda Egg box? Or a team of rivalrous pirates with a leather map and telescope? Are you the poet who left us a little verse? This should reach cult status, I want it to. Now, after all that, I think it’s time for some of Aunt Fanny’s apple cake. Rather!

Find a cache near you!