I MEET Sue Rodgers in Lanjaron, a pretty spa village in the Alpujarras – the starting point for my journey of herbaceous discovery.

This spot in the foothills of the Sierra Nevada is an ideal place to experience Andalucia’s rich and varied flora.

After all, it boasts a mammoth 2,000 plant species compared to a measly 1,500 in the whole of Britain.

Sue, a cheerful 57-year-old (below), has been running herb walks for three years, having moved to Spain from Surrey in 2005 with husband Pete, 61, an ex-Royal Navy Chief Petty Officer.

The day begins with a gentle, 2km saunter up to the couple’s country house, where we will stay until we come back down a different way later on.

On the way Sue shows me several herbs on the side of the path, explaining their origin and benefits, along with an impressive number of interesting facts about them.

There is lovage, placed in medieval travellers’ shoes to combat pongy feet, horsetail, whose high content of silica made it a great scouring pad during Roman times, and horehound, which the Egyptians used to fight coughs.

Then there’s fat hen, whose seeds were found in the stomach of the 4th century BC mummy Tollund Man, who probably ate them because of their high content of albumen – the same protein that is found in egg whites. 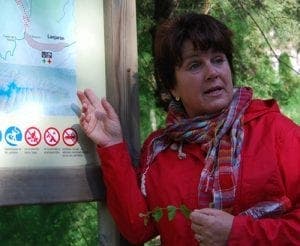 Because the walk is leisurely and mostly on tracks – with Sue regularly pausing to point out herbs on the way – it strikes me that it would be ideal for people of all ages.

And the views are simply awe-inspiring: “Every day I look out and it’s completely different,” says Sue.

In a shady spot, we enjoy tiny cups of fresh herbal tea – the first of five I get to sample throughout the day (mint, hyssop, sage, rosemary and lemon verbena) – along with home-made cake flavoured with fresh lavender.

At the house I meet Pete, who takes me on a tour of house and garden, complete with composting toilets, solar panels and reed filter beds.

“We both believe passionately that everyone can make a difference to improve the environment,” says Pete, who built the house completely from scratch. “However, we don’t believe it has to be all hair-shirts, muck and manure – it can be fun.”

Over lunch – a healthy spread of colourful dishes with, of course, many fresh ingredients from the vegetable patch – Sue explains a bit about her background.

“I was among the first intake of students on Plymouth University’s Environmental Science course in the 1970s,” she explains.

“Back then, the only agencies for change were the Friends of the Earth and Greenpeace – but I wanted to get involved in the industry side of things, to start making them think differently,” she adds.

Sue later worked as an environmental auditor, making sure big companies were complying with international regulations. 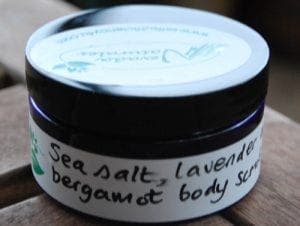 Through their walks and self-sufficiency courses, Sue and Pete hope to introduce elements of their lifestyle to the uninitiated in an enjoyable and interesting way.

“I try and do things people don’t usually get the opportunity to do,” explains Sue.

After lunch, Sue gets out an inspiring selection of essential oils, herbs, pots and measuring jugs and gives me a choice of herby products to have a go at making.

Following her clear instructions, I produce a lavender and bergamot body scrub entirely from scratch (above), while my colleague James sets about making a fresh-smelling household deodoriser.

To make the body scrub, I crush the dried flowers in a pestle and mortar, mix them with salt and sweet almond oil then add a few drops of bergamot essential oil.

The finished product smells divine and when I use it in the shower later, I realise it beats any manufactured version hands down – and not only because I made it all by myself.