A SPANISH company has moved Scotland a step closer to becoming the ‘Saudi Arabia of renewable energy’.

It comes after energy company Iberdrola teamed up with Scottish Power to place an underwater propeller off the Orkneys.

Astoundingly the turbine, 45 metres under the surface, produces enough energy to power 500 homes.

Scotland has now agreed to install 10 more turbines in the area, in the biggest project of its kind in the world.

“You don’t know when the wind is going to blow, nor at what speed – whereas with tides, you can predict what they are going to be like,” he said. 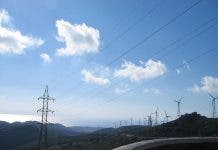