The property market may be suffering and the press may be full of stories about how we are all desperate to go home, but don’t be fooled.

The truth is us Britons show no signs of falling out of love with Spain – and the claims that a third of us want to go home are, quite frankly, well wide of the mark.

Spain is by far the number one choice for Brits seeking a place in the sun and even those who choose not to live here keep coming back on holiday. Well, around 12 million of us, at least, each year as it happens.

Coming primarily for the beaches, we are also here for the culture, the food and wine, with cities like Sevilla, Salamanca and Madrid, brimming with British tourists.

This is all, of course, well catalogued… with writers such as British author George Orwell writing in Homage to Catalonia: “I would sooner be a foreigner in Spain than in most countries. How easy it is to make friends in Spain.”

What is less well known however, is that the love affair flows two ways.

Despite centuries of wars and hegemony, the two nations have now forged a long-lasting bond that ties them, imperturbably, together.

And furthermore, the Spanish actually have a fondness for the English that far exceeds tolerating us for spending vast sums of money in their bars.

As many as 71,000 Spaniards have now officially made their home in the UK, a figure that is rising as the Spanish are forced to go searching for jobs. On top of this, at any one time there could be at least another 100,000 Spaniards living a footloose life, many in West London.

While Brits in Spain are taken by sun, sea, sand and sangria, etc, the Spanish are mostly seduced by our music, football…. and the fact we actually stop at zebra crossings!

On top of this, according to online forums, the Spanish like our television programmes – in particular comedy – as well as the concept of being an English gentleman.

“I love the traditions and the values in the UK,” explains Jose Ramos Paul, a winemaker from Ronda. “The British are patriotic and look out for themselves.

“And I love how much they support the monarchy.”

He continues: “Of course there is a history war and both of us had empires that brought us into conflict but we have supported one another when it was needed.

“I have a lot of English friends and I think the relationship between Spain and England is very good now. In fact, I would argue it is the one of the countries we have the strongest relationship with. We understand one another.”

Much of this can be put down to the monarchy, as it happens, with the Queen of England actually being a cousin of Queen Sofia of Spain.

When speaking about the close bond between the royal families Queen Elizabeth II actually once remarked that ‘all four of us’ – referring to herself, the Duke of Edinburgh, and the Spanish king and queen – ‘are the great grandchildren of Queen Victoria’.

Relations between the two families go back more than eight centuries however, even before the establishment of the current Bourbon dynasty in Spain and Hanover in Britain. 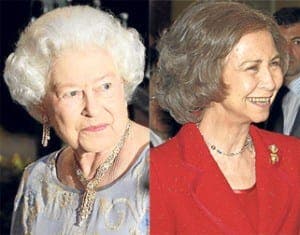 The two families were related by marriage for the first time in 1170, when the daughter of Henry II (of England), Eleanor, married King Alfonso VIII of Castile.

“There are a lot of connections between the two countries,” explains Gonzalo del Rio y Gonzalez-Gordon, from Carmona, whose family has run the famous Gonzalez Byass sherry house in Jerez for 176 years.

“A lot of English people are partners with Spaniards in business and I think the two countries have a wonderful relationship from business to personal relationships.

“My great granddad actually married a Scottish lady and despite the English being Saxons and the Spanish being Latin, it works well.

“I like the English culture, the customs, the education, and, above all, the way you understand honour and principles.

“I certainly think most Spaniards like the English and we have a good future.”

The Driving Over Lemons author, who insists he will only ever ‘leave Spain in a box’, insists: “The British and Spanish get along pretty well.

“We were sworn enemies for a long while, of course, and the relationship has been up and down but I think it is in a good phase at the moment.

He continues: “We have certainly had no trouble at all being accepted into the local community and it has been that way from the beginning.

“I would like to think we are well thought of. I certainly think well of them,” he adds.

“The cheap booze and the sunshine is a big attraction but there are also more profound things. There is a cultural connection.

“Spain has always had something exotic about it.

“Now everyone wears the same things but it has still retained a hint of exoticism that you see through things like bullfighting. There is a certain otherness but at the same time it is not too far
from England.”

He continues: “The Victorians when they visited actually often wanted to be captured by bandits. After all, it was a friendly ambush and they would pay them and it was all part of the travel experience.

“We must also remember we did them a big favour in getting rid of Napoleon,” he adds.

At the start of the Napoleonic Wars, and notably the Battle of Trafalgar, Spain found itself allied with France.

But this was short-lived and when Napolean invaded Iberia to foist his brother onto the Spanish throne, the British and (most) Spanish joined forces.

A united British-Spanish-Portuguese army, under the command of the Duke of Wellington, eventually forced the French out of Spain, in what the Spanish now call their War of Independence.

Although history, as taught in Spanish schools, minimises his contribution and those of the British soldiers that fought with him, there is no disputing that the Duke of Wellington was the driving force behind the success.

Of course, this is not the only time that the British have taken up arms to defend their Spanish neighbour.

At the outbreak of the Spanish Civil War many Britons travelled out in great haste to defend the Spanish republic.

The first British volunteer to die was actually a female artist Felicia Browne, who was killed attempting to blow up a fascist munitions train on August 28, 1936.

Many Britons served in several of the hastily raised militia units even before they were grouped together in the International brigades.

“I would like to think I’d have been with them,” continues bilingual Stewart, who has lived on a farm in the Alpujarras for more than two decades.

“It is very admirable. They came to fight out of a passion for Spain and a battle against fascism that was lost and then won.”

But we have not always fought for a common cause, it should be pointed out.

In 1587, for example, Sir Francis Drake attacked the port of Cadiz and seized 3,000 barrels of the drink which soon became a favourite with the English Court and was even recommended by Queen Elizabeth I. 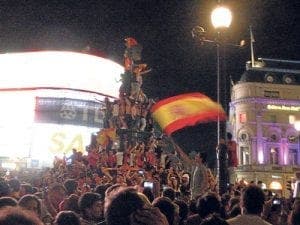 Due to the ever growing popularity of sherry, many British entrepreneurs later set up their own businesses in Jerez during the 17th and 18th centuries.

Names such as Gordon, Garvey, Byass and Sandeman became identified with the area.

“The Brits are clearly lovers of all good things,” adds Gonzalo del Rio, who sits on the board of the huge sherry dynasty Gonzalez Byass.

“They are always eating and drinking the best quality foods and wines and they always seek out the best places.

“Indeed, if you look at all the good places in history the British found them.”

And where, of course, have we settled the most? Well, in Spain.

And having lived together, fought together, worked together, married each other, and shared our hobbies, our cultures, our music, our food and our eccentricities, is it any wonder we are good friends?

The longer Brits live in Spain the more they become accustomed to the Spanish way of life, with things that once seemed strange now completely taken for granted.
The following list highlights some of the eccentricities of Spanish living that are now an everyday occurrence for expats.

1) You think adding lemonade or coke to red wine is perfectly acceptable.
2) You can’t get over how early bars and clubs shut back home.
3) You aren’t just surprised that the plumber/decorator has turned up on time; you’re surprised he turned up at all.
4) You’ve been part of a botellon.
5) Not giving every new acquaintance two kisses seems so rude.
6) On MSN you sometimes type ‘jajaja’ instead of ‘hahaha’
7) You think aceite is a vital part of every meal. And you don’t understand how anyone could think olive oil on toast is weird.
8) A bull’s head on the wall of a bar isn’t a talking point; it’s just a part of the decor.
9) You’re amazed when TV ad breaks last less than half an hour.
10) You forget to say please when asking for things – you implied it in your tone of voice, right?
11) You don’t see sunflower seeds as a healthy snack – they’re just what all the cool kids eat.
12) Every sentence you speak contains at least one of these words: ‘bueno,’ ‘coño,’ ‘vale,’ ‘venga,’ ‘pues nada’…
13) You know what resaca means. And you had one at least once a week when you lived in Spain.
14) You eat lunch after 2pm and would never even think of having your evening meal before 9pm.
15) You know that after 2pm there’s no point in going shopping, you might as well just have a siesta until 5pm.
16) You know how to change a gas bottle or bombona.
17) On a Sunday morning, you have breakfast before going to bed, not after you get up.
18) The fact that all the male (or female) members of a family have the same first name doesn’t surprise you.
19) You know that the mullet didn’t just happen in the 80s. It is alive and well in Spain.
20) You know the difference between ‘cojones’ and ‘cajones’, ‘tener calor’ and ‘estar caliente’, ‘bacalao’ and ‘bakalao’…and maybe you learned the differences the hard way!

WATCH: Sweet moment Queen Letizia gives a hug to a pensioner in the middle of an award ceremony at Madrid’s Circulo de Bellas Artes

THE QUEEN IS DEAD: Expats in Spain mourn the death of the UK’s longest-serving monarch

‘Black suits and dresses at the ready’: How we dealt with royal deaths at the BBC