DURING his lifetime he exhibited his work around the world and even sold his sculptures to the King of Spain.

Sadly the well known American sculptor, Bayard Osborn has died shortly before his 90th birthday after a long illness.

Born in Manhattan in 1922 he was one of the first foreigners to move to Gaucin where he lived for over 30 years in a house which hosted a spacious top-floor studio, where many of his works were on display.

While most famous as an artist, Osborn was also with the US troops who liberated the concentration camp at Mauthausen during the Second World War.

He was also one of the last direct links to the New York avant garde of the 50s, including Andy Warhol, and to the Bloomsbury Set, specifically Hispanicist Gerald Brenan.

He leaves behind his widow Pilar, children Margaret, Io and Nicolas and step daughters Isabella, Lucinda and Consuelo, as well as his beloved dog Dolly. 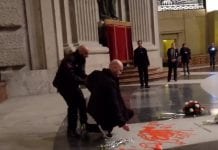 WATCH: Man defaces General Franco’s tomb in Madrid with red paint and is dragged away by security guards