AS I pass an old man proudly re-painting his house in the midday sun, the same immaculate white as every other home in his street, I soon realise why the town remains so popular.

Despite tourism turning Mijas into a bustling, internationally-known resort, it has somehow – unlike many of its nearby rivals – managed to conserve its Andalucian village charm.

This is the real treasure of Mijas; the tranquility of village life, coupled with the pleasures of a busy coastal life just down the road.

“Most of all, I think it is the beautiful architecture that brings people to Mijas Pueblo,” explains Malaga-born local Rocio Munoz, sitting watching the world go by in its charming Plaza de la Constitucion. “It is also full of life with plenty going on, thanks to the town hall, which organises lots of events.”

But this however, was not what first attracted Rocio to the classic white town, which clings to a hillside between Malaga city and Marbella overlooking the celebrated Costa del Sol.

What she always wanted to see were the donkeys. “When I was a child in Malaga I used to hear about the famous donkey rides in the village,” she recalls.

“All the kids heard about this magical place and wanted to come because of it. When I finally made it I knew I wanted to live here and that is what happened.” 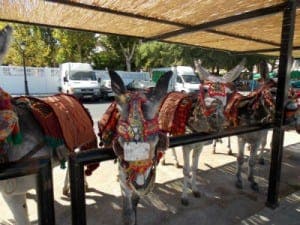 From the main square I headed off for a stroll in the nearby countryside passing hundreds of small white houses that cling to the hillside as I wandered deeper into the foothills of the Sierra de Mijas mountains.

You are soon in stunning countryside – on well marked footpaths – and it is easy to forget that you are only a 10-minute drive to the Costa del Sol and 20 minutes to Malaga airport.

Despite the recent fire – the biggest the Costa del Sol has ever seen – the area around Mijas village is totally unscathed.

Current mayor Angel Nozal is undertaking a major overhaul of the walking and hiking routes around Mijas next year.

He told the Olive Press: “It is one of the things we really want to promote for the town.

“It brings the right sort of tourism and we certainly have just the right conditions to offer the perfect outdoor style holiday here.”

He is in charge of Malaga province’s third biggest municipality and Mijas is anything but just the hillside town.

Head down the hill and you will soon enter ‘Mijas Costa’, one of the most popular and profitable destinations on the Costa del Sol.

Las Lagunas (which sits next to Fuengirola), La Cala de Mijas, Riviera del Sol, Miraflores and Calahonda make up Mijas Costa, a ribbon of seaside villages and developments which all offer sandy beaches and a great range of restaurants and places to stay.

It is here that numerous celebrities have come to buy homes and stay over the last few decades, with Chris Tarrant and Ryan Giggs frequent visitors, while Victoria Beckham spent her childhood summer holidays in Riviera.

The prettiest of the resorts is, without a doubt, La Cala de Mijas, which was once known as La Cala del Moral (the Bay of Mulberries) due to the mulberry trees growing around the village.

The tourism boom of the 1970 and 1980’s changed La Cala from a small, white-washed fishing village of to a popular resort town, which today counts over 20,000 residents.

It has an excellent local school and is well sited for the nearby towns of Fuengirola, Benalmadena and Marbella just a short bus ride away.

Its 12th century Torre de Calahonda is one of four towers that line the Mijas coastline once used to warn nearby towns of enemy boats approaching.

The watchtower is now used as a museum with an exhibition devoted to the traditional fishing customs of Mijas Costa.

From here there are over 12 kilometres of golden beaches running in each direction, some of the best include Riviera, La Luna and Butibamba Beach, which hosts various musical events throughout the summer. 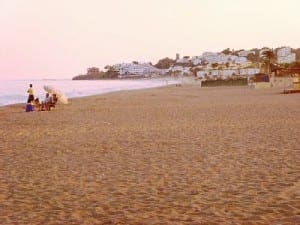 Mijas is, of course, also renowned as a golfers paradise, boasting some of the best courses in Spain.

La Cala Golf and Mijas Golf are just two of the courses in the area that attract amateur and professional golfers from across Europe.

Meanwhile Mijas Costa Hipodromo has become very popular with visitors and residents who enjoy a night at the races.

Many horse owners come from other countries to take advantage of the good climate and year-round racing season.

As well as horse racing, the complex also houses an athletics course, fully equipped gym and a swimming pool.

But it is up in ‘Mijas Pueblo’ that you will find what is known as the ‘real Spain’.

The pueblo feels like a giant balcony overlooking the Mediterranean and the other areas in the municipality.

It is a great place to while away an evening, particularly in Plaza de la Paz (The Peace Square), watching village life go by.

There is even a fabulous chocolate factory the Mayan Monkey Mijas, where kids can learn to make chocolate.

Elderly locals sit in small gangs, bemused at how popular their little village has become. 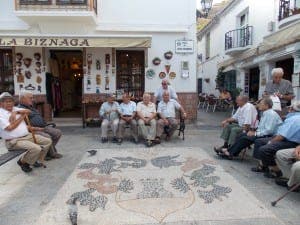 Looking down to the coast again from the edge of the village, it seems to have the world at its feet.

It was certainly how the tens of thousands of Britons and other expats felt when they came to settle here over the last few decades.

The town is one of Spain’s most popular for foreign residents and Mijas seems to have all its qualities on display.

As mayor Angel Nozal insists: “There are few better places to live in Spain and the mix of nationalities is incredible. It is a true melting pot and luckily most people seem to get on well.

“Obviously the most important thing is to come up and see for yourselves.”