AN expat is warning disabled users to be careful after his car was towed away despite carrying a valid ‘blue badge’ permit from the UK.

Cancer patient Gerald Crest, who has difficulty walking, is demanding his money back from Estepona Town Hall after his car was towed away from a disabled bay in the town.

Despite the town hall and local police later admitting his blue badge, issued by West Sussex County Council, is valid, he is still waiting for a refund of the €69.50 fine.

“We went for a coffee, came back and there was no car,” explained Crest, 68, who used to work in marketing.

“The local police tried to claim the blue badge wasn’t valid in Spain.”

“We’ve been to hell and back,” continued the Briton, who spends half the year on the Costa del Sol with his wife Sharon, 64.

He believes the main issue is the new style of card which bears a hologram instead of a big blue box with a wheelchair symbol on it.

“I have now written to Estepona’s mayor to demand my money back,” he said.

The new electronically-printed badge (pictured below along with the old-style badge) was introduced in January as part of new measures to address fraud.

A West Sussex County Council spokesman said this was the first problem arising from the new blue badge design she had heard of.

“The Department for Transport introduced the new design in January 2012.

“The new badge is designed to be harder to copy, forge or alter and includes enhanced security features for the prevention of abuse.

“The blue badge is recognised throughout the European Union although the concessions provided in other EU countries may not be the same as in the UK. All badge holders are advised to check before travelling.

“We have offered our assistance in this situation by supplying supporting documentation that we hope the local authorities in Spain will consider accordingly.”

Mr Crest later said West Sussex County Council had offered to speak to Spanish police with an interpreter present to ensure he is reimbursed. 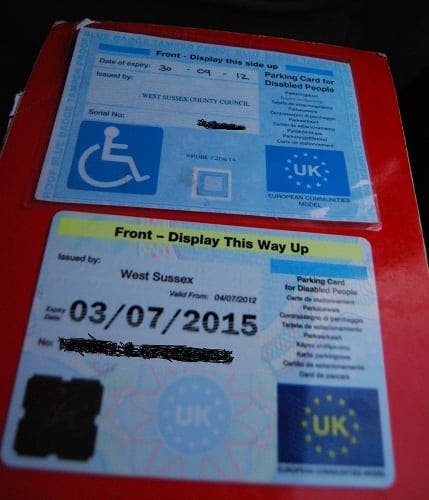 Help at last: Gibraltar to open first school for students with special needs