OUR car wound up from the coast, the angular peaks of the Serrania de Ronda dominating for miles around.

A somewhat daunting drive, the curves seemed to get tighter and tighter until the cloud line finally gave way to a mountainscape like no other.

And suddenly, the ‘City of Dreams’ appeared below us, a flash of white nestling in a secret valley encircled by mountains.

With the journey up from the Costa del Sol once taking four hours, arriving in Ronda must have felt like the pot at the end of the rainbow.

Thankfully the city – raved about by politicans and writers, including Ernest Hemingway and filmmaker Orson Welles – is now just 45 minutes away by car.

It is a town to which many return, including chef Jamie Oliver and British Prime Minister David Cameron, who was back again this summer, taking lunch in the old town.

It was also an important pilgrimage for Bill Gates, who came last year to try its wines, and America’s First Lady Michelle Obama, who arrived while researching her family’s Arab roots.

It is certainly one of the finest places in Spain to appreciate the legacy the Moors left on the peninsula.

The old town is full of reminders of their culture, its well-preserved buildings, sitting proudly beside cobbled streets.

It is a pleasure to visit Ronda’s dramatically deep Tajo gorge, its three fascinating old bridges, and enjoy its uncanny ability to provide spectacular vistas whichever way you turn.

For me, you might call it a kind of homecoming.

Having relocated to the coast with the Olive Press just a month ago, I was now taking some friends around Andalucia, with Ronda set to be the climax of our trip. It certainly did not let us down. 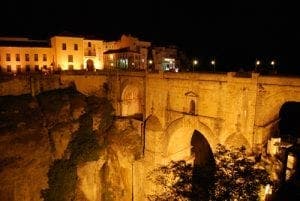 Built in 9BC, Ronda was a key military bastion during the Roman Empire.

It was later transformed by the Moors, who were responsible for many of the factors that make it so special today.

The oldest quarter is La Cuidad – preferred hangout of Orson Welles’ – which retains its Moorish street plan and boasts a number of fine Renaissance mansions.

With its ruined Alcazar and crumbling city walls, it is not hard to imagine what life was like throughout centuries of Moorish rule, which ended in 1485.

There are many clues including the beautifully preserved arches of the 13th century Banos Arabes (Arab baths) on the south-east bank of the River Guadelvin, and the minaret, the surviving tower of a 14th century mosque which was later knocked down to make space for a Christian church.

The Puerta de Almocabar, leading into the Barrio de San Francisco which houses many traditional-style bars and restaurants, was the main Moorish gate and can still be admired in its entirety.

One place not to miss is the Casa del Rey Moro, where America’s First Lady brought her daughter Sacha in August 2010.

Mrs Obama surprised onlookers by descending the 300 or so uneven steps to the bottom of the Tajo, wanting to discover more about this 14th century house whose secret staircases allowed Moorish defenders to fetch water from the River Guadelvin in times of siege.

Czech poet Rilke dubbed the city rightly as the ‘City of Dreams’, while Irish writer James Joyce wrote: “With the old windows of the houses, the eyes which spy out hidden behind the latticework so that their lover might kiss the iron bars, and the taverns with half-closed doors in the night and the castanets and the night.”

No fewer than three bridges span the gorge, with the 14th century San Miguel bridge, the 17th century Puente Viejo and the spectacular main bridge – or Puente Nuevo – which was built in the late 18th century and connects the old town with the new.

It is this bridge, which was made so famous by Hemingway in For Whom the Bell Tolls, who described how prisoners were slung off it during the Spanish Civil War.

Heading into the new town brings just as many interesting places to visit, starting with the bullring – Spain’s oldest – which today hosts the biggest single event in the country’s bullfighting calendar, the Goyesca.

Weaving round the outside of the ring – where you can pick up a fun horse and carriage tour of the town – brings you to the Almeda del Tajo botanical gardens, whose shady avenues provide much-needed shade on a summer’s day. 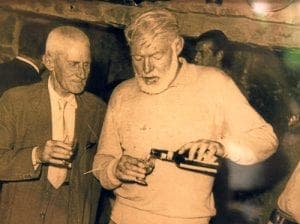 The gardens are an ideal place to while away a few hours with a newspaper or book, glancing up every so often at the view of the surrounding Serrania – arguably the best view in Andalucia.

From here, you can take a stroll along the adjoining Paseo de los Ingleses or ‘English walkway’, which was built to maximise viewing opportunities for visitors.

Also in the new town is the bustling main shopping street, Carrera Espinel (locals call it ‘La Bola’) which offers local seasonal produce and knick-knacks aplenty and should be included in any visit to Ronda.

It is here where the town comes out at dusk en masse to take its so-called ‘paseo’ before nightfall.

Because Ronda is set high within a mountain range, and at the mouth of the Genal Valley, the surrounding areas are also waiting to be explored.

A good daytrip could combine a visit to the Roman town of Acinipo just 12km away – with its stunning Roman amphitheatre – followed by a short drive to the cavernous Setenil de las Bodegas, where the Romans used to keep their wine.

Or you may fancy a stroll to the stunning Cueva del Gato (‘Cat’s Cave’), or wish to discover why the looming dam built in nearby Montejaque was never once used.

Whatever you decide to do, there is enough to keep you busy for weeks.

I later caught up with my friends for a beer in Plaza del Socorro, Ronda’s main square, to see what they thought of the town.

“Stunning,” said Caroline Herran, 30, a teacher back home in the UK. “Its location could not be better – completely surrounded by mountains – and the type of people, and tourists you meet here, are different, more cultured somehow.”

Later that evening I sat sipping a glass of Chinchilla, a Ronda red wine, at my favourite bar La Lechugita – where, unlike many places on the Costa del Sol, tapas are just 80 cents each.

And I knew that, like Orson Welles – who insisted his ashes were scattered in Ronda in 1985 – it will forever hold a place deep in my heart.

A bolthole above the clouds in the Sierra Nevada