THERE’S no denying it. We’ve all been there; alone, pissed, stumbling down the street, when suddenly that matchless and unmistakable whiff mercilessly hijacks our nostrils and sends us trotting along in a desperate mission to locate its source as quickly as possible.

Next, a good fifteen minutes is spent swaying in front of/squinting at an otherwise remarkably easy-to-read menu, before an order is finally placed. Further waiting ensues until eventually, after what has seemed like an eternity, you are finally handed your piquant prize. The first bite is heavenly. And the second, the third too, and before you know it, it is gone. Devoured in all of ten, hazy minutes.

Then, the guilt sets in; ‘I’ll go for a jog tomorrow’ you tell yourself, or ‘It’s ok because I got lots of salad’. ‘That diet wasn’t working for me anyway’ etc. If truth be told, there is no way of justifying your actions, just as there often seems to be no way of avoiding the lure of what is arguably the middle-east’s greatest ever export after a skinful.

In fact, one will often go to great lengths to ensure that they are able to lock lips with the one they call the King of all Kebabs. Some, it turns out, will even go so far as to risk imprisonment

No joke. A couple of weeks ago, a man in Tel Aviv decided that he was so hungry that he walked into his local Kebab house and threatened workers at gunpoint, demanding to be served a Shawarma. Fortunately, the crazed kebab thief was granted his wish, topped with extra cheese, chili sauce and a fried egg, and nobody was hurt. Shortly after the incident, the man was arrested by police, who confirmed that they were able to identify the culprit due to excessive amounts of egg on his face. Ahem.

But this story got me thinking – what is it about this delectable indulgence that drives the human senses so wild? I mean, how can something smell that good?

Ok, we all know that they are desperately unhealthy, and if you’re perfectly sober, and it’s daytime, then the thought of sinking your choppers into one of these may not seem overly appealing. Blind drunkenness aside though, surely there is another reason for man’s unwavering affection toward this mouth-watering treat? 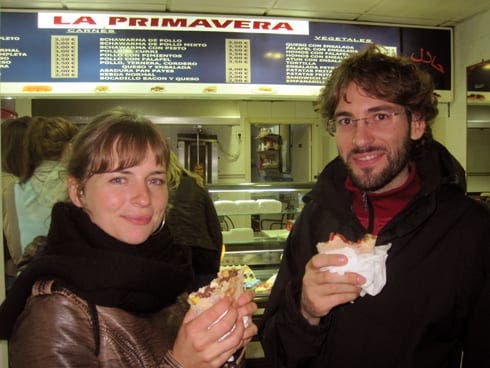 Feras, my local Shawarma merchant in Granada, was kind enough to share with me his thoughts on the matter:

“At the end of the night, when people are drunk, there is nowhere else open, so they have to come here. There are no secret ingredients. We just open the doors, the smell drifts out onto the street, people come in and that’s all there is to it”

Not exactly the myth-busting answer I was hoping for but an answer nonetheless. It is what it is: a bulging, piping-hot, meaty snack, intended for drunkards. And long may it continue to be.