IT’S not just humans suffering from the norovirus this winter as it sweeps through Britain and Spain… a robot has now become the latest victim.

The robot, which has been affectionately named, ‘Vomiting Larry’, was made to help researchers at the Health and Safety Laboratory to understand the bug.

The puking robot allows researchers to evaluate how the virus can spread so easily from person to person.

He is made up of a cylinder body filled with water and florescent liquid.

He has a head with an open mouth and a pump which ejects water through the mouth to simulate a robotic form of projectile vomit similar to that of humans.

The extent of contamination is then measured by the amount of fluorescent particles in the room.

Thanks to Vomiting Larry, researchers have discovered the virus could spread over three meters.

This means the area that needs to be cleaned and disinfected is much larger than previously thought.

The virus is also resistant to several cleaning products, such as ones that are used to clean bathrooms and kitchens and hand sanitizer. 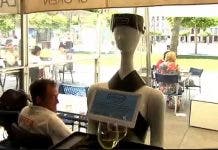