THE tax status of foreigners living in Spain has been subject to extensive debate and is a question open to interpretation, particularly considering the ability of people to travel freely within the EU.

This column is far too short to be able to explain in details all the intricacies of this matter but the 10 points below will help clarify some of the most common questions about tax residency status.

•The distinction between tax domicile and tax residency is a concept more associated with common law systems, and almost ignored by Spanish laws.

•Firstly, tax residency is demonstrated by means of a Fiscal Residency Certificate, issued by the tax authority, which should confirm the taxpayer is a fiscal resident in that country and that he is subject to tax on worldwide income. According to Spanish Courts however, this is not the sole means of proof.

•The Spanish Income Tax Act states that tax residency in Spain will be determined by one or more of the following: spending more than 183 days of a calendar year in the country, having a business based in Spain and having a spouse and dependent children residing in Spain.

•The 183-day count ignores temporary absences except where the taxpayer demonstrates tax residency in another country, with a certificate as per point two.

•Tax residency in more than one country is possible; double tax treaties signed by Spain generally stipulate where such taxpayers should be taxed.

•Where the taxpayer invokes tax residency in a tax haven, the Spanish Tax Office may request proof of physically being there more than 183 days, in addition to the documentary evidence as per point two.

•Where a taxpayer of Spanish nationality changes his tax residency to a tax haven, the Spanish tax authorities will still consider him/her a tax resident in Spain for the next four years.

•Where a taxpayer has economic interests in more than one country, the tax authorities will take into consideration the weight of each as well as the intensity of social, political and family relationships in each of such countries, or having a permanent dwelling in, or nationality of, that country.

•Spanish authorities may apply for information from countries with whom a tax information exchange agreement has been signed; the UK is one such country.

•Double Tax Treaties are in place to prevent tax evasion, not to encourage it: this applies to the anomaly of using UK companies to avoid Spanish inheritance taxes. 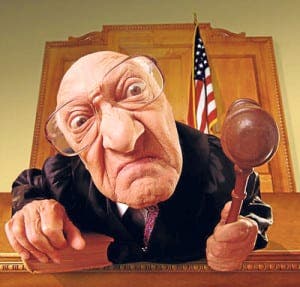 Q. What is the judicial procedure to remove a Judge who is biased?

A. The procedure is called ‘recusation’ and it implies challenging a judge or magistrate because of a possible conflict of interest or lack of independence.
This judicial disqualification process needs to be brought on the basis of being related to any of the parties having friendship or enmity with them and generally, having a direct or indirect interest in the case.
Q. I have not paid my property service charge and my name has been prominently displayed in the entrance hall to my building. Is this legal?

A. In principle, the Data Protection Act prohibits publishing personal information in public places, this being one of them.
However, in respect to these debts, where the Community of Owners has been unsuccessful in notifying you personally, they are entitled to use the notice board without risking breaking the laws.