ARE you a die hard consumer? What are the deal breakers in your life that you couldn´t live without? For most it would be hot running water, flushable toilets, washing machines, a TV screen in the corner of the room and internet. But can we survive without them?

Right now, Spain is undeniably in the midst of its biggest financial crisis in many years, and one of the first areas of consumer activity to be hit was of course the property market, followed next by new car purchases. So people are clearly tightening their belts, but for many, just by a few comfortable notches.

But there is a slow burning movement taking hold, a definite move away from consumerism, where beating the Jones´ in conspicuous consumption is being supplanted by a lifestyle motivated by sustainability and minimising our carbon footprint.

Deep in the foothills of Aroche, close to the Portuguese border, a Belgian couple are living a paired down life that is arguably far richer than most of our mundane but technologically advanced existences.  Ana and Marco have turned their backs on the fast living facilitated by electrical appliances and mainstream technology in favour stripping things back to their basic form. 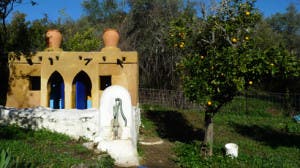 You want a shower? Well you better walk 15 minutes downhill to the vegetable patch, pump some water, build a fire, heat the water and finally empty the hot water into the giant terracotta receptacles that sit on top of the specially designed outside showers. Only then can you experience what I can honestly say was the most delightful shower experience of my life, where shafts of light entering through the glassless windows mixed with hot steam and wood smoke, rising from the fire’s smouldering embers. I felt like it wasn´t just my body being cleansed, but my spirit as well.

It´s no surprise then that there are no flushing toilets at Ana and Marco´s, but again this was no hardship. There is a compost loo, where you do your business and then cover it with sawdust, while all the while looking out over the breathtaking views of the Picos de Aroche. I can´t think of anywhere else I´d rather be for my early morning toilet visit, watching the pinks and purples fade as night becomes day. 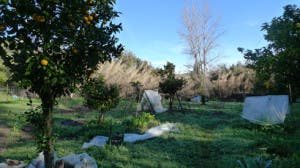 Food of course is organic and grown as much as possible in the huerta (veg patch), which is designed on a permaculture basis with sustainability in mind. Inevitably it´s not possible to live completely off the fruits of the soil all year round, but all effort is made to eat locally sourced, organic products, many coming from a local co-operative.

And drinking water, that precious resource that we take so much for granted, just turning on the tap, filling our glass and quenching our thirsts without thinking of the whys and where-for-alls of from whence it came. Well here in this little corner of paradise it comes from a well, and you need to pump it. ‘Piece of cake’, you might think. So it is, apart from the fact that the well is 15 minutes down a steep hill from the house, and would be tricky to negotiate even for the most nimble 4-wheel-drive vehicle. 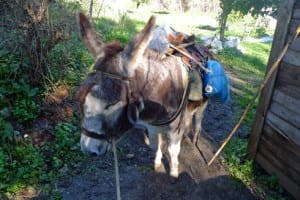 There is only one ‘chap’ for the job, and that is Lucero the sure-footed but decidedly mischievous donkey. I have a fair amount of experience with donkeys, having grown up on a farm with 15 of them (my life in the competitive world of donkey derbys may make a future post), but dear Lucero and his ‘sense of humour’ had me running around like a headless chicken, when after being wooed into a false sense of security about his willingness to be caught, he proceeded to successfully make a break for freedom through a part opened gate. But anyway, donkey antics aside, by the time I got to the top of the hill, that glass of water refreshed the parts that ordinary tap water certainly could never reach.

‘So what is the point of all this?’ you might ask. Why choose to spend your waking life manually doing the chores that technology have made possible to do in an instant? For me it was summed by watching Ana scrubbing her clothes by hand, after having boiled them in a big pot on an open fire, with a blissful smile on her face that personally I’ve never seen worn by someone operating a washing machine. She was there being fully present to what she was doing, which contrary to what most people would think about returning to pre-washing machine dark ages, was an utter pleasure to her.

For me, dipping into Ana and Marco’s world was inspiring and thought provoking. It was a simple rhythm of life that was somehow hypnotic, and one to which I can’t wait to return. Ok, I have to admit I probably would become a bit of a soap dodger if I lived there for any length of time, as just jumping into the shower is out of the question, but maybe that’s a good thing, as the whole experience made me think more about our precious resources and how we should be more mindful to conserve them.

Equine outcasts teach us a thing or two

To be or not to be a Guiri, that is the question