ANY vaguely savvy tourist would only have to Google ‘The Beach Club Hotel, Torremolinos’ to feel slightly wary of their impending stay.

Finding a cockroach in your pasta, dirty water in the pool and guests spending several days on the toilet is not exactly a glowing legacy for this four star hotel.

Dubbed ‘the worst hotel in Spain’ by the tabloid press, scores of the unfortunate guests were struck down by a mystery stomach bug during their 2007 and 2008 stay.

Two months ago, as reported in the Olive Press, tour operator TUI was ordered to pay out almost €4 million in compensation to more than a thousand guests.

But five years on, does this hotel really deserve its bad reputation?

We decided to sample the delights of Spain’s very own Fawlty Towers to see if it’s as bad as reports would make us believe.

So one drizzly day last month (OK, we can’t blame that on the hotel) I headed for Torremolinos, one of the most prolific holiday resorts on the Costa del Sol.

It certainly doesn’t start well, after a desperate search around a packed hotel car park leads to a staff member to recommend that I drive half a mile down the road and park up by the side of a dark street, lugging my, er, luggage, back to the hotel.

I finally arrive at 8.30pm – tired, hungry and hoping for a cosy and comfortable stay.

Presenting my booking details and hunting down my passport from the bottom of my bag I hopefully look to the receptionist, who looks at me like I’ve just walked in from out of space.
Yes, a guest has arrived.

Being a hotel this is normal protocol right?

More bewilderment follows and I’m left to lug (I see now where the word luggage comes from) my bag up to the 8th floor to settle down in my room.

Then after two (yes TWO!) failed attempts to open the door and two trips back down to reception the key card finally works and I open the door to find a room that would make a Travelodge look spacious.

Noting the lack of toiletries (two dental kits and a vat of liquid soap isn’t going to get me very far with regards to keeping up appearances) I remember the sea view I paid extra for.

With great expectations I draw back the curtains hoping for the rolling ocean I had paid good money to see from the comfort of my balcony – but instead a massive hotel block and a bin yard greets me with the kind of embarrassing inevitability of an elderly relative turning up at your 16th birthday party.

If I risk my life by leaning over the balcony and look over to the far right, I can just about spot the elusive waves.

Ignoring the pounding dance music coming from below, which gives the impression I have just rocked up at a squat party rather than a 4 star hotel, I head back downstairs for dinner.

At the entrance to the dining area I am met by two burly security guard-types who look like they mean business.

They ask me to rub my hands with disinfectant from a dispenser attached to the wall, “only because it’s a buffet and people touch the food which can spread germs”.

So with the smell of disinfectant in the air and trepidation in my heart I enter the dining room.

The only dining area at the hotel where guests can enjoy breakfast, lunch and dinner as part of their all inclusive package, the low-ceiling room can only be described as a battle-ground.

An every-man-for-themselves free for all, where you queue for coffee and struggle with metal tongs to claim your piece of bacon or a fried egg.

While it’s clear hotel owners, Marconfort, have learnt from their mistakes following no doubt a stern word or two from health and safety bosses (you can’t give three generations of the same family and hundreds of people food poisoning without some kind of consequence) it’s still a very hands on, over-crowded experience that no amount of hand disinfecting will combat.

One olive and half a slice of pizza later I am left at the bar thanking God that at least the vino tinto should probably be OK.

At first I thought it was a bit of cork from the wine bottle…but as it wriggled around on my tongue it became apparent this thing was alive….poking my tongue out I discover a black insect!

On closer inspection, it seems the offending creature is as innocent as a fly in your glass of wine can be, and I resolve not to let ‘fly-gate’ ruin my Beach Club experience – so time to muck in with the other guests and enjoy the all-inclusive booze.

From a hoard of over-excited Glaswegian women on a hen-do to a group of lads from Cheltenham in search of fun in the sun – there’s no doubt tourists are still flocking here from the UK for an enjoyable holiday despite the dubious newspaper reports. Some guests even come several times a year and for Suzanne Cooper, 55, from Newcastle, the hotel’s bad reputation didn’t stop her and her husband booking a two week stay.

She said: “Most people know what happened and yes, people do talk about it but it really doesn’t bother me. I have stayed on cruise ships when there has been an outbreak of the norovirus. These things happen.

“They are doing a lot to stop germs spreading and overall I think the positives outweigh the negatives.”

And as I settle down to an evening of owl shows and a live concert, I have to agree.

Yes, the place could do with a bit of a makeover, some of the carpets could do with being replaced and a paint job wouldn’t go amiss…. oh and another restaurant would also improve the overall experience no-end.

However, generally speaking most of the staff went out of their way to be helpful and were much friendlier than those I have often found working in the more expensive hotels.

But perhaps most importantly of all, the guests seemed to be enjoying themselves despite the rain outside.

I must confess however that I did spend a few days feeling unwell after checking out of the Beach Club, and the case on what caused the sickness bug remains open. 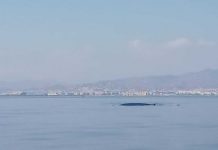 Lydia Spencer-Elliott - 27 Oct, 2020 @ 20:30
NETFLIX have commissioned and scheduled seven new Spanish shows in a bid to replicate the success of Money Heist and Elite.