A BRITISH family have been driven from their home after suffering ten years of attacks from their neighbours.

The Baker family have been forced to flee their home in Alhaurin el Grande after a string of break-ins and intimidating tactics that even included firing airgun pellets through a child’s bedroom window.

“We’ve had our front door set fire to, tyres slashed, windows broken and shot at, they are very intimidating,” said Ian Baker, 42, who runs an air conditioning business.

Over the years the family have been burgled five times and had their home attacked over a dozen times.

The final straw came when his van was set on fire two months ago. 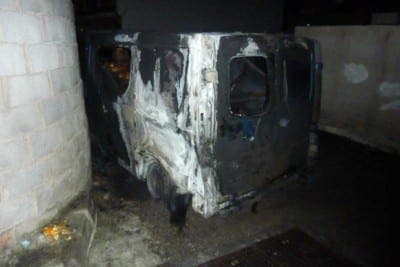 “We moved out two weeks ago and the property has already been broken into again twice,” he added.

“There seems to be no way of stopping them getting in. I have no idea what to do.”

He claims his family are the third British family to leave the street after becoming victims of a gypsy community in the Bajondillo area of the town.

He insists all attempts to talk to the group have failed.

When he saw a group of youths shooting an air-rifle towards his house he told them to pack it in. “The next thing a bullet came through my son’s window,” he said.

He has been forced to go public on the situation as the police have failed to do anything to protect his family.

“It just seems a waste of time contacting the police, there are so many break-ins in the area,” he added.

Each time he has reported it the police have done nothing, he insists. “Clearly they are very understaffed. When I called them to tell them my van had been torched they said they were busy on another job.”

They were unable to use CCTV he had installed, as the footage was not clear enough to identify the perpetrators as they set fire to his van.

Of the two other British owners who have fled, one house has been ‘completely wrecked’ while the other ‘now has gypsies living in it!’, claims Baker.

A spokesman for the town hall insisted she was unable to comment on the case. Police were also unavailable for comment.

Over the years the neighbourhood has seen various schemes to try and improve the relationship between the gypsy community and other locals.

In 2006, €180,000 was allocated to improve Bajondillo and other surrounding areas, while in 2011 Mayor Juan Martin Seron called for ‘more solidarity and social balance’ between the gypsy community and other locals.