IT’S teatime on a wet Wednesday in April when the Algeciras-to-Ronda train makes an unscheduled stop at San Pablo to collect 24 passengers from the rain-soaked platform.

This is unusual. There’s not too much call for San Pablo, a Toytown station in the middle of nowhere particular, so the train doesn’t always stop here.

But this is no ordinary escorted group tour, as I already know. I’m in the next carriage, keeping a low profile, a proviso of being privy to this top-secret visit.

I feel like a spy, my nose pressed to the rain-spattered window, watching them. Two British peers of the realm, their ‘Lady’ wives and an assortment of Honourables; three generations of the same family (practically an entire dynasty), climbing into a one-class-fits-all carriage.

I’m not sure what I’m expecting. Pomp and circumstance? Twinsets and pearls? (What foolish stereotypical notions we journos sometimes entertain!) Maybe not leggings and pacamacs, though.

So what are they all doing here, in this far-flung but far from God-forsaken spot in rural Andalucía?

The short answer is, they’ve just eaten lunch. At the railway station. Not an establishment you would ordinarily find Lords and Ladies frequenting. But L’Estacion is no ordinary railway buffet. This charming country station that could have been plucked from the pages of a Thomas the Tank Engine book does double duty as a gourmet restaurant.

(While I was munching on a muesli bar from the train’s vending machine, these distinguished guests were dining on veal topped with foie gras!)

The longer answer is, they’ve flown out to Spain for a whistle-stop tour of their heritage: the Victorian train line locally known as ‘Mr Henderson’s Railway’. It was financed by the patriarch of their tribe, Sir Alexander Henderson, 1st Baron Faringdon of Oxfordshire, a mere ‘Mister’ when it opened over a century ago.

Mr Henderson financed many more famous and important railways in his time but none with so colourful a history: a line in Spain plied by British trains powered by steam through notorious ‘bandit country’. He also financed elegant Edwardian hotels at either end, the Reina Cristina in Algeciras and the Reina Victoria in Ronda. Their own history is spiced with stories of Hollywood stars, WW2 spies and a young Winston Churchill. (More on that coming soon!)

Celebrities and writers rode the line (the ubiquitous Hemingway too – he sure got around). TB sufferers and the families of Gibraltar garrison officers rode it for a fix of Ronda’s fresh mountain air. Fine Edwardian ladies rode it (craning their necks for a glimpse of those reckless bandits, no doubt). Smugglers rode it too, to sell their contraband goods through the carriage windows.

Today, two of Mr Henderson’s great grandsons and their clan are riding the line for the very first time. (Perhaps for the last time, too, but that’s another story.)

The train is modern but the views are little changed in over a century: a collage of cork oaks, dwarf olives, crumbling fincas, nesting storks, lonely goatherds and majestic mountain peaks flashes past the carriage windows, much as it did in Mr Henderson’s day (but now in faster-forward).

The train winds a circuitous trajectory across river and mountain, via 20 bridges and 16 tunnels, to an altitude of 730 metres – an astonishing feat of engineering.

Much like the present Lord Faringdon and family’s visit – a one-year feat of engineering.

It took eight months of mind-boggling Spanish bureaucracy to engineer the train’s un-timetabled stop at San Pablo (where it sometimes stops anyway) … plus a lot of nuts and bolts in assembling the three-day itinerary.

For this feat of ‘people engineering’ Manni Coe, indefatigable MD of Toma Tours, should take a bow. Manni lived up to Toma’s promise of showcasing ‘the Spain you never knew’ – in spades. Keeping 24 members of the same family happy on a whistle-stop tour in a foreign country deserves a mention in the annals of guiding.

(Maybe he’ll get one. I wrote to TV train buff Michael Portillo and now he’s planning a Great Continental Railway Journeys programme about the line. Toma’s Revival Walking Tour this October, based around the railway, can only benefit.)

Manni has also engineered an exclusive interview for me.

While I wait, I pace the laminate floors of the hotel, recently reopened after zealous refurbishment. Most of the original objets d’art have been spirited away for safe keeping by the new owners, Fundación Unicaja Ronda. But the wallpaper and mirrors in the Salon de Espejos are genuine.

“I’m Mark,” says Lord Marlesford of Suffolk, offering me a firm handshake. “Lord Faringdon will be along shortly. We’re second cousins, you know.”

Lord M regales me with tales from his Cambridge undergrad days. In the 1950s he worked in the kitchens and waited on tables at the Reina Cristina! (More on that coming soon!)

We are joined by another distinguished-looking gentleman with silver hair and a broad smile. The present and 3rd Lord Farringdon, in the flesh (and looking great for 75).

For the next hour we talk about everything – the weather, the IMF, jamón Ibérico, the “splendid” countryside views through the train windows – everything except what I’d really come for: the history of the train itself.

Old photographs, perhaps? Memorabilia? Timetables? Letters? Anything at all?

Lord F shakes his head. “Nothing. You see, I come from a family of shredders. When my great grandfather died, all he left in the middle drawer of his desk was his passport and title deeds.”

“Although maybe I do have something …” Lord F, seeing I’m crestfallen, goes off to his room to fetch it.

He returns with a photocopied excerpt from The Tangier Diaries 1962-1979, by American author John Hopkins. “Wonderful writing – sums up the whole thing, I think, including the weather,” he laughs.

And he proceeds to read it aloud, quite beautifully, with enunciated consonants and rounded vowels. English as it used to be spoken! (I’d link you to the tape recording but the ‘musak’ in the background quite spoiled it.)

This is what he read:
“Today we took a train up here through the green hills of Andalucía. Spring has come howling into southern Spain and, after days of torrential rain and frightening winds, we were greeted by sun and a profusion of wild flowers. Fat pigs snoozed contentedly beneath the cork oaks and we passed the diminutive, immaculately white Spanish RR stations one after another. Now we are living and working in this austere but comfortable hotel (the Reina Victoria). A thick, icy wind moans out of nowhere as screeching eagles dive over the cliff. Rilke stayed here during the winter of 1912-13. His sad effigy surveys the valley from the garden.”

“Let’s have one beside old Rilke,” says Lord F, when I ask if I can take a photograph. Thousands of German-speaking tourists flock to the Reina Victoria just to share the views that inspired this Austro-Hungarian poet.

It’s windy and spitting with rain again, so the scene is perfectly set.

Out into the garden we go and stand by Rilke’s statue, sharing his view of the mist-swathed valley below us (minus screeching eagles).

It’s one of those fleeting moments in time you know you’ll remember forever.

As we say our goodbyes, Lord Marlseford glances at my business card and chuckles.

“Mistress of Sizzle eh … what’s that all about?”

Sometimes, I wish I knew!

“Well, everyone claims to be a writer these days so I have to make the distinction,” I explain. Lord M understands. He was a journalist on The Economist. Although it was a bit easier to earn a living from writing then, than now.

I’ve spent unpaid weeks ‘selling the sizzle’ of this wonderful little train and Lord Faringdon’s visit. What a great story! But only Michael Portillo replied (well, his researcher, to be honest). My other emails are circulating in cyberspace, marked ‘deleted, not read’. Enough to make anyone’s sizzle fizzle…

But I’m not giving up! My brief encounter with two British peers on a rainy day in Ronda has rekindled my sizzle. I’ve made a spiritual connection with the railway that stops in my village (Los Barrios) and I’m going to ride this train to the end of the line. 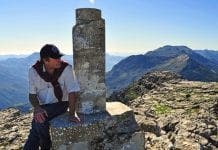 My Top 10 places to visit around Ronda