RIGHT now Sevilla, Andalucia and Spain at large is a place where you can feel the civil unrest bubbling underneath the surface.

Turn the corner into any of the large municipal squares and almost every day you´ll be greeted by the shouts and whistles of marchers demonstrating against the cutbacks in health care, education and welfare. Also at the top of the protesters´ agendas is the fight against residents´ evictions both from their own homes after defaulting on their mortgages and most recently from the once vacant houses they have occupied in order to stay off the street.

A country decimated by unemployment has left huge swathes unable to afford to pay for their accommodation, and with over 130,000 unsellable properties lying empty in Sevilla alone, many have taken to squatting in what have become known as Corralas. This isn´t squatting in the sense that you may be familiar with, ie young, crusty types who break into posh houses and then proceed to turn them into a burned out, graffitti´d crack den. (you have to excuse me for turning into the Daily Mail for a moment). These are entire families, including young children and the elderly, who out of sheer desperation have taken measures into their own hands and occupied vacant buildings, facing often draconian measures by the properties´ owners and the authorities.

This anti-eviction movement dates back to long before the current property fueled financial crisis, where in Sevilla since the 1980s there´s been a slow, insidious campaign to oust some long standing residents who have somehow avoided rent adjustments over the years and as a result limited profitable returns for their landlords. Often any maintenance of the buildings has been slowly withdrawn leaving the buildings in such a run down state that there has been no alternative but for residents to move out. Such as in the Case of Casa Pumarejo, which lies just within the walls of the historic city centre, bordering with the working class district of the Macarena. 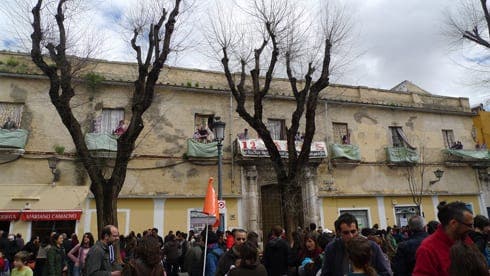 Dominating Plaza Pumarejo and dating back to the 18th Century, this impressive building has claimed many uses in its time, including a prison the civil war, a hospice, a school for adults and after a conversion of the second and third floors at the end of the 19th Century, the heart and home to many local residents. However since the 1990´s  it has fallen into a state of disrepair, with the owners deciding they´d rather sell the historic building to a hotel group, using the tried and tested method of withholding vital maintenance in order to force the remaining residents out.

But their attempts have been thwarted at every turn, and rather than buckle and give into their demands, the residents´ resolve has been strengthened, and a fiercely active community created. As well as protecting the rights of the tenants within Casa Pumarejo, a whole network of community projects have grown out of this elegantly crumbling shell. Just take a peak at the Plataforma Pumarejo website and there are a whole raft of services and facilities available from a library, Italian cinema, a kind of legal aid office, Spanish classes, a sewing group and yoga. All are self-generated and directed towards the local community, and have more than a hint of an anarchic kick back against the system. None more so than ´The Puma´, a local currency used for exchanging goods and services within the local area.

The Puma is part of an exchange program where instead of paying someone with Euros you exchange Pumas (1 Puma = 1 Euro), as long as you are both part of the Puma network. Signed up are a variety of companies and individuals supplying goods and services such as locally grown vegetables, artisan bread, natural beauty products, bicycle repairs and osteopaths to name but a few. But if you´re not ready to sign up to be part of the Puma Network, you can dip your toe into the inviting local exchange waters by coming down to the monthly market happening every second Saturday of the month, where all the suppliers ply their goods and trades and you can buy Pumas from a desk at the entrance of the building. I bought the most amazingly delicious homemade bread from the aptly named ´Anarchopan´, and was sorely tempted by some seasonal veg straight from the huerta (veg patch), but rather annoyingly had just done my shopping at the nearby Feria Market. 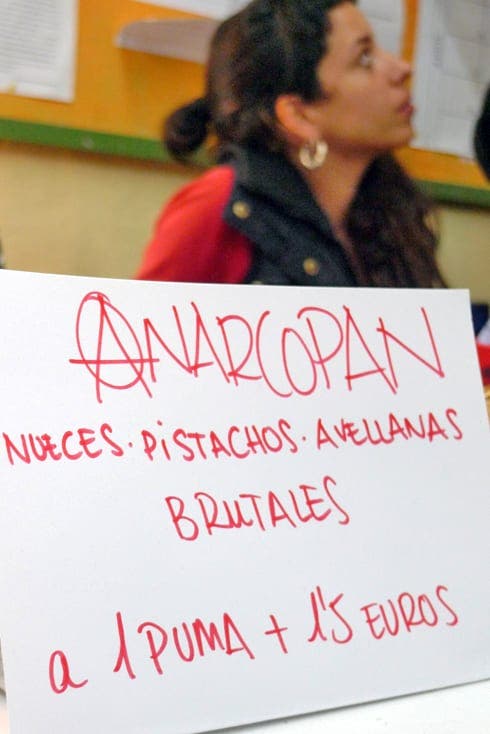 On these days Plaza Pumarejo heaves with a warm haze of community spirit and Cruz Campo beer, that makes me want to close my Santander bank account and deal only in Pumas from that day forth. Just in the act of exchanging my Euros and buying that loaf of bread, I felt the inner anarchist bursting out from inside me. Who knows next time I might go wild and buy some bread AND vegetables, by which point me and ´The System´ will be over for good.