THE British Embassy in Spain has issued another urgent plea to the public to keep an eye out for British expats committing benefit fraud, and to report any suspects immediately.

With an estimated 800,000 Brits living in Spain, the crime is unfortunately common. According to authorities, there are “more allegations made about people living in Spain whilst continuing to receive UK benefits than in any other country where British expatriates live.”

The Department of Work and Pensions asks people to remember that to continue to receive UK benefits while living elsewhere is to effectively steal money from taxpayers and thus from “valuable public services” like hospitals and schools.

One recently publicized case was that of Peter and Marilyn Flanders of Exmouth, Devon, who swindled more than €35,000 in benefits by lying about their Spanish villa and claiming to be homeless.

The investigators want to remind you that all “benefit fraudsters are thieves.” If you suspect someone you know of committing this crime, call the free and confidential hotline at 900 554 440, or fill out the following form online:  http://campaigns.dwp.gov.uk/campaigns/benefit-thieves/english.asp 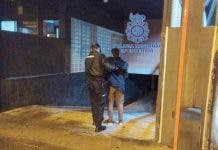