A GROUP of frail and elderly expats have been forced out of their homes following an investigation into the mystery death of a British pensioner.

Several tenants of the Casares del Sol urbanisation have been removed by the Guardia Civil after the body of Sydney Chatwin, 87, was discovered in mysterious circumstances a fortnight ago.

Officers have sealed the apartments only allowing residents to enter under police escort while they investigate what they believe to be an ‘illegal care home’ operating in the building.

Contrary to reports in Sur in English however, both the owners – and various tenants – deny that any of the residents suffered from negligence.

They also insisted that the residence is not a ‘care home’, but rather individually-leased apartments with‘assistance available if needed’.

“We simply lease apartments and provide help when it’s required,” owner Robert Whatley, a former builder from Hampshire, insisted to the Olive Press.

The 60-year-old explained how Chatwin, from Warwickshire, had arrived at the urbanisation – via charity Age Concern – in April after allegedly being robbed.

“We were contacted by the charity and asked if we could help in an emergency case as he was old and in a bad way. He had nowhere else to go.”

Age Concern insisted any financial issues ‘would be sorted out later’.

“He had come straight from the Costa del Sol hospital and he had nothing but an empty wallet, his passport and the clothes he stood in.

“We took him to the medical centre and contacted his family to let them know he was in one of our apartments.

“It was all done at our expense and we took care of him for two months and did everything in our power to help him,” added Whatley, whose wife Sheila, 71, also works with him.

Under his new regime, Chatwin’s health stabilised until he suddenly took ill on June 13, which prompted Whatley to call an ambulance.

But after being rushed to a medical centre he was brought back having been given the all clear. He died the same night.

When police arrived on the scene, residents claim they were ‘man-handled’ and forced to go to hospital.

One tenant’s daughter, who has asked only to be identified as Mrs Brunton, complained about the treatment of her 89-year-old father, who was described in the Sur in English report as being in a ‘very poor state of health’.

“It is simply not true. The Sur said he was really ill, but if he was so ill why was he let out of hospital the same day?”

She is adamant that the whole attitude of police and the courts was inappropriate.

She continued: “The police came in mob-handed and a judge ruled he was dying and shouldn’t be here. It was ridiculous.

“The police wouldn’t even let Robert or Sheila explain what was happening to him.

“They just took him to hospital and didn’t even ask for any of his medical history,” added the outraged daughter.

“He’s been having nightmares because of this, all my dad wants to do is go home,” she added. “He loves it there.”

Leila Bourquin, 74, a close friend of another tenant at the urbanisation has also defended the ‘assisted living’ apartments.

Bourquin, who is currently letting her 73-year-old friend Fleur Fitzgerald stay with her while the investigation is under way, said: “It is Fleur’s apartment and I don’t know why the authorities think it is illegal, she has her own tenancy agreement.

“I just think they haven’t seen anything like this before and it disturbs them.”

Age Concern President Eileen Dry expressed her surprise at the raid, adding: “As far as I was concerned they were fully registered there.” 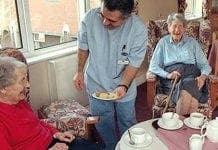 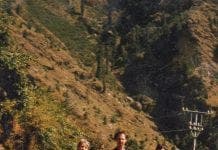