THE driver of the derailed train was recorded yelling ‘I f***** up. I want to die’ as the all eight carriages came off the track – killing at least 80.

The on-board recording device reveals Garzon’s desperate pleas to the Alvia Trains control room as the magnitude of the smash dawned on him, Spanish newspaper El Mundo reported.

‘I’ve derailed,’ he told the rail company’s nerve centre as the dust settled around the wreckage. ‘What do I do? What am I supposed to do? I f***** up. I want to die.’

Minutes after the crash – which also injured 141 people, he was photographed being helped from his train’s mangled remains by a medic, blood oozing from a wound on his head onto his blue uniform.

The transcripts of the recording was released hours after it was reported Garzon previously posted a picture on Facebook of a train speedometer at 125mph last year.

According to reports he also boasted about how fast he was going. The webpage has disappeared after images appeared on Spanish TV and newspaper websites.

Alongside the photo, which was published in March last year, he wrote: ‘What joy it would be to get level with the police and then go past them making their speed guns go off. Ha ha!.’ 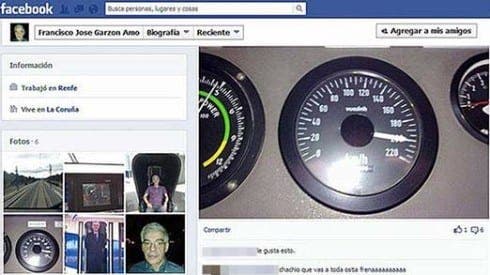