THE Olive Press website has been given a silver award in the inaugural My Currency Transfer Expat Stars Award.

The winner was Spain Expat, while the Olive Press beat the Telegraph into second spot, while the Sur in English came fourth. 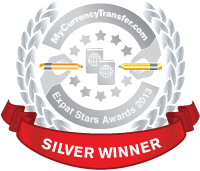 The EuroWeekly News did not make the top ten.

The awards have been launched to celebrate excellence in the online expat community.