1. VIDEO: Two British-owned homes have been demolished in Spain and two more will come down this week

Two homes owned by Britons have been demolished in Cantoria, Almeria following a court order, while two more are due to be destroyed this week. Read More

2. The ten biggest mistakes tourists and expats make in Spain

For those of us who live in a city which could be regarded as a tourist destination, foreign tourists stand out like a sore thumb. Read More

Catalunya Caixa is to slash its workforce by a third as it looks to shrink its balance sheet and restructure its operations. Read More

Two more British families have seen their dreams turned to dust after their properties were demolished in Almeria. Read More

5. Protesters strip naked to make a point against animal cruelty

Activists took to the streets to protest against animal cruelty in Spain. Read More 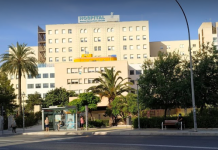