WRITER and illustrator Seamus Shortt has penned an environmental story in Spain in which the protagonists are all animals.

While the story Montevivo is fiction, the book has an underlying message about the importance of conservation.

It was written as a tribute to Félix Rodríguez de la Fuente, a Spanish naturalist and broadcaster.

Shortt told the Olive Press: “The story centres on two main characters who live in the mountains of Spain – a large loveable bear, Bruno, and the narrator, whose identity will be revealed only as the tale unfolds

“Many other animal characters invite us into their wonderland to enjoy their extraordinary escapades.”

The action begins on the peak of a remote mountain called Montevivo, where the ´rhythm of life beats in harmony with nature´.

Events build up to the annual harvest festival with feasting, dancing, music and romance.

“There follows a vile criminal act perpetrated by strangers, and our heroes embark on a dramatic pursuit of the culprits that takes them beyond their known world.”

Shortt also illustrated the novel, and included a 15-line environmental manifesto within its covers.

The book will be available at bookshops around the region, including Longmans in Estepona, and the English Bookshop in Manilva. 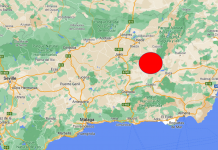