Sanchez faces three years in prison, as well as a €8.6 million fine, over accusations that she was part of an embezzlement scheme, involving between €7.6 and €8.6m.

Under Spanish law, a bail payment must be set 30% higher than the ordered fine, as a guarantee.

If Sanchez cannot find the money, the court may seize property equal to the amount owed.

Police started the investigation following complaints from the PP party in July 2011.

The city of Jerez is one of the most indebted in Spain owing over €1billion.

Last month the alleged ringleader of the plot was released on bail in Sevilla. 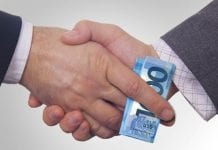 SHAMEFUL: Spain loses €90 BILLION per year due to corruption while UK among LEAST corrupt in EU, study reveals