THE Bishop of Malaga has condemned a petition launched by Sabinillas residents to remove their local priest, commending him for his, ‘clear, direct style’ and accusing the parishioners of ‘harassment’.

The 1,500 name petition was launched against the priest, Nicholas Timpu, after he told mourners at the funeral of a ten-year-old girl not to cry because he ‘knew she was going to die’ and that ‘the worms are eating her now’.

The priest is also reported to have chastised mourners for crying at another funeral, because the deceased ‘was a sinner’.

When mourners questioned him over the comments, he told them to ‘shut up’ because ‘the same thing could happen to you’.

But the bishop said: “Some of his phrases have been taken out of context and manipulated, changing the true meaning.”

Locals also claim the priest refused to perform communion for a girl because she was ‘full of sin’ and would ‘burn in hell’. 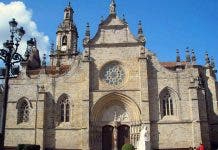